Heartbreak to heartfelt: The story of the Cartier Love bracelet 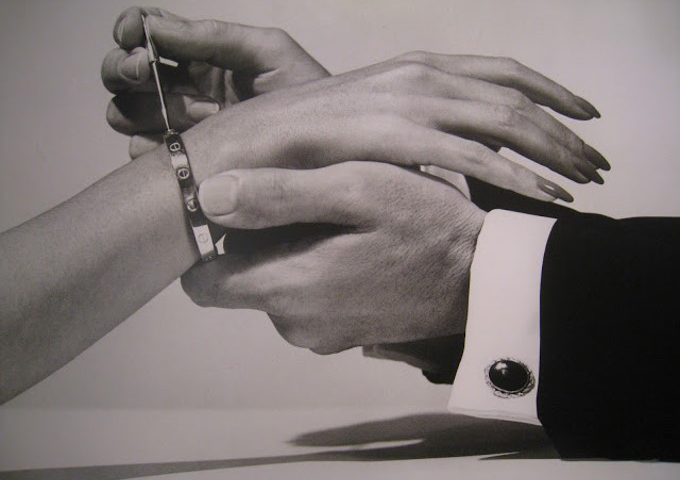 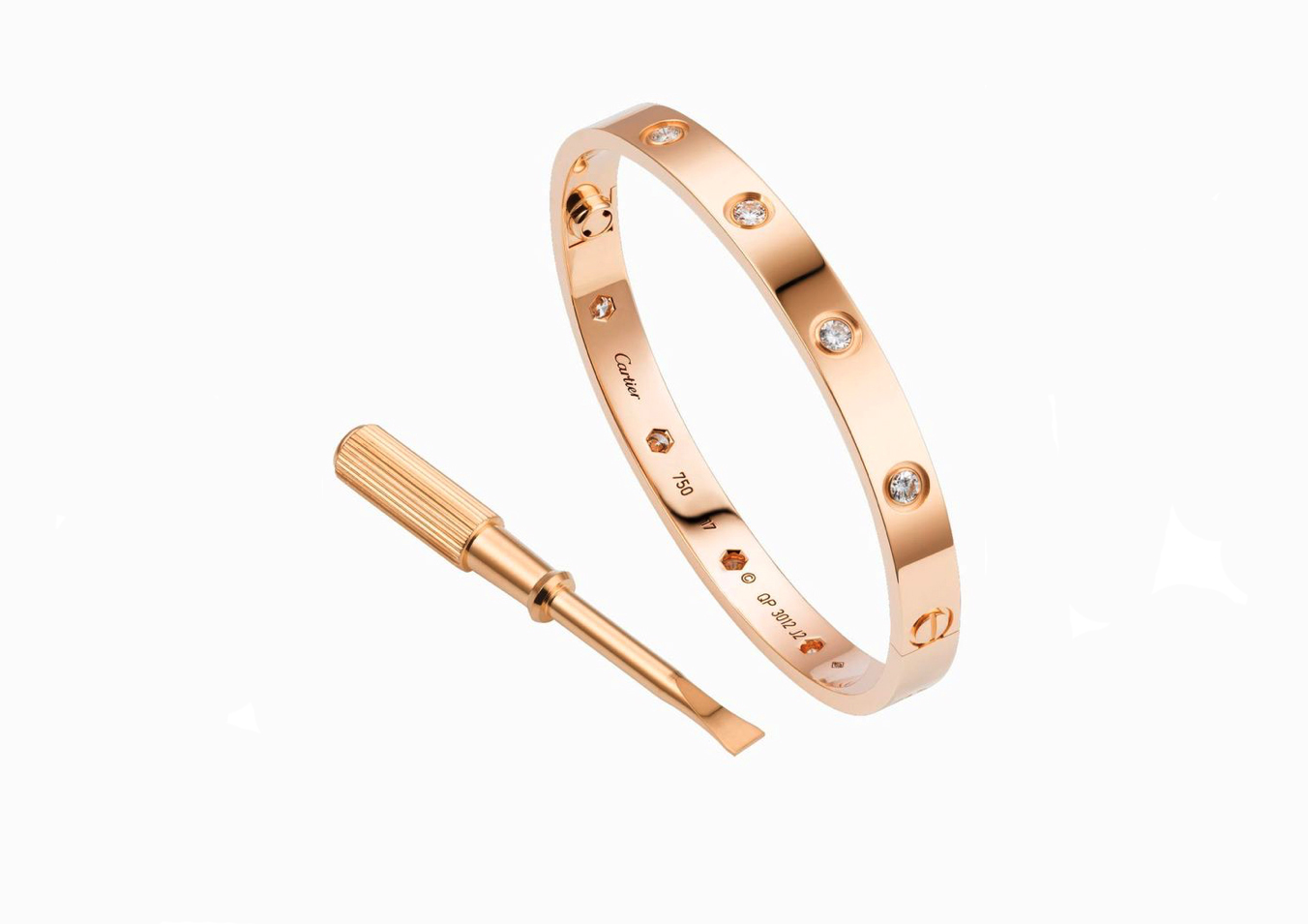 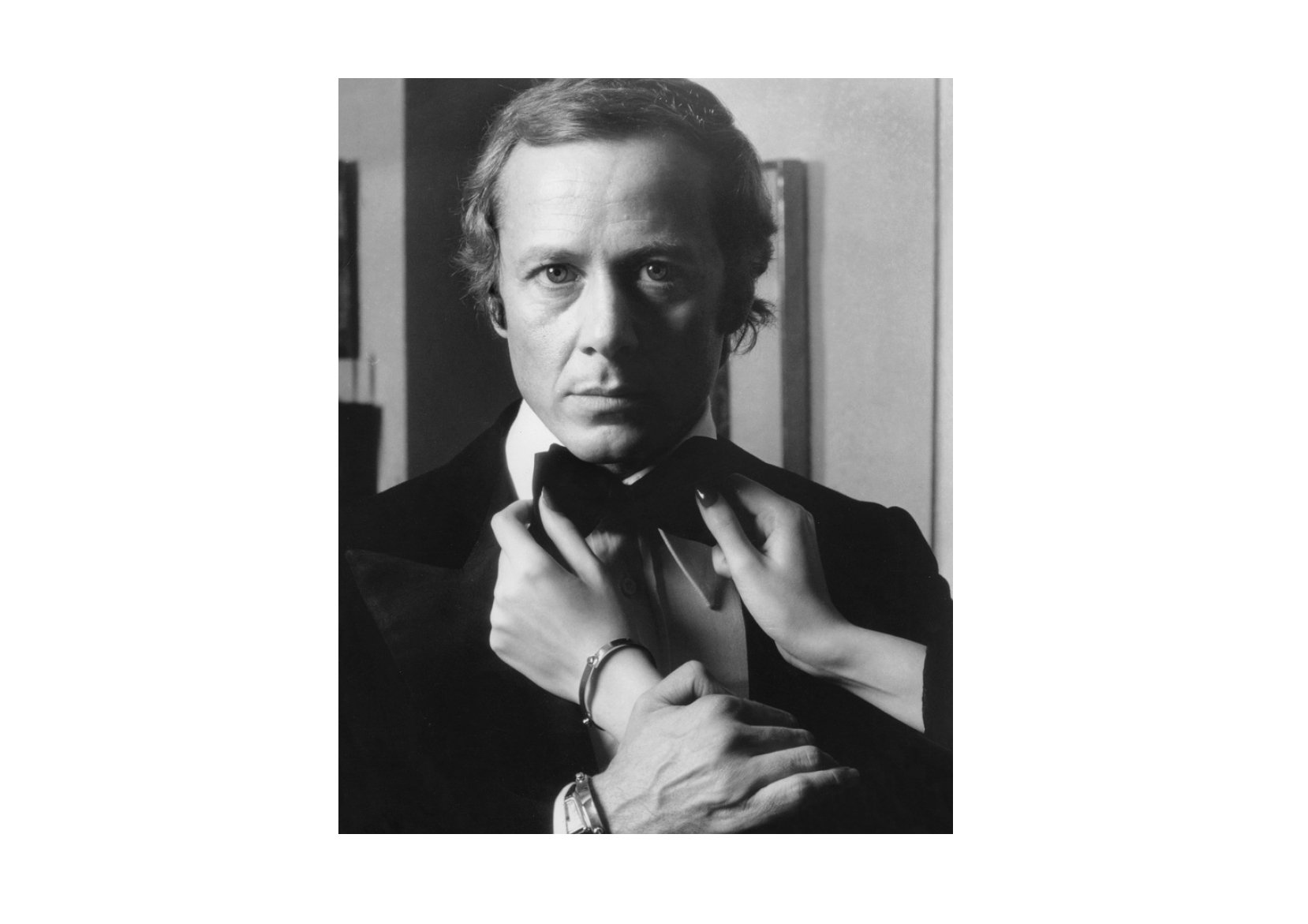 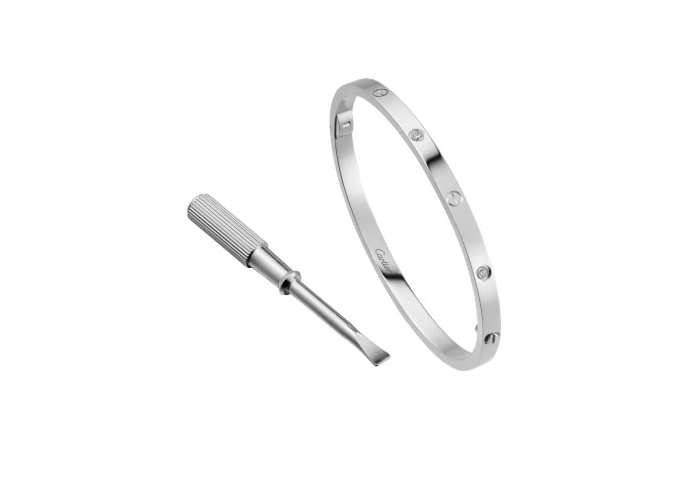 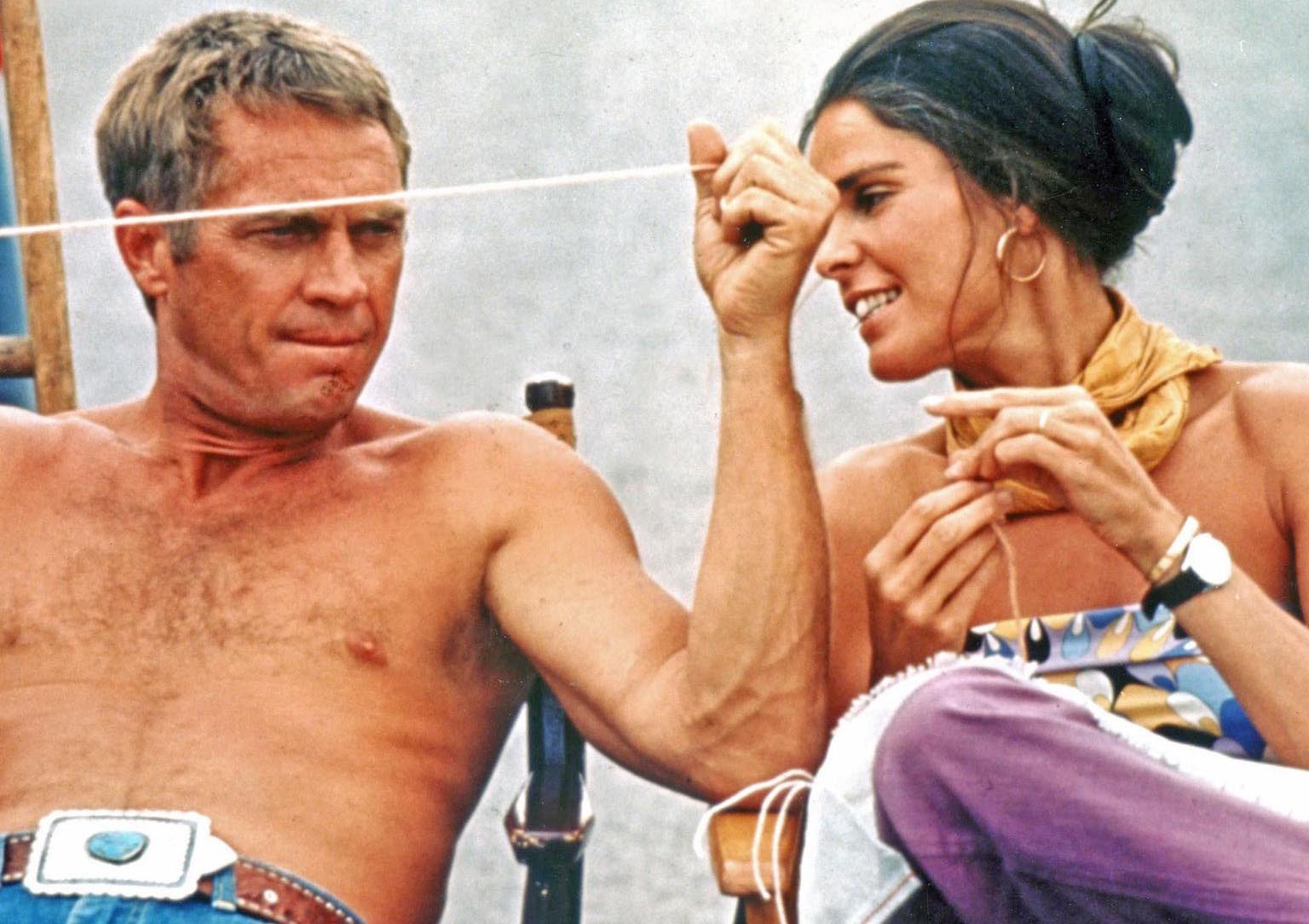 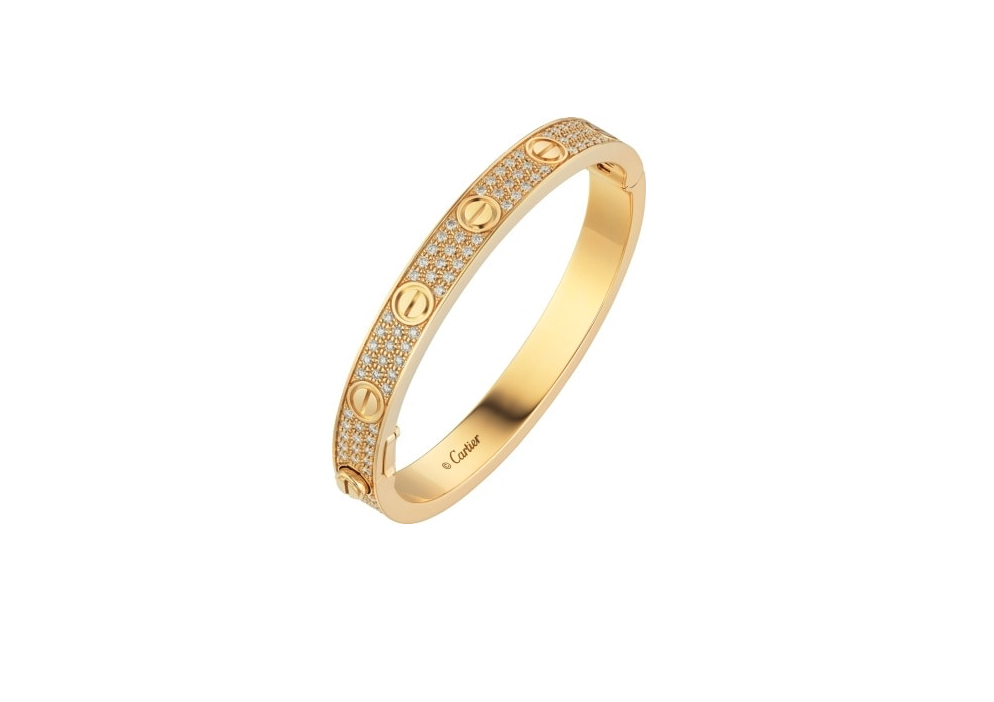 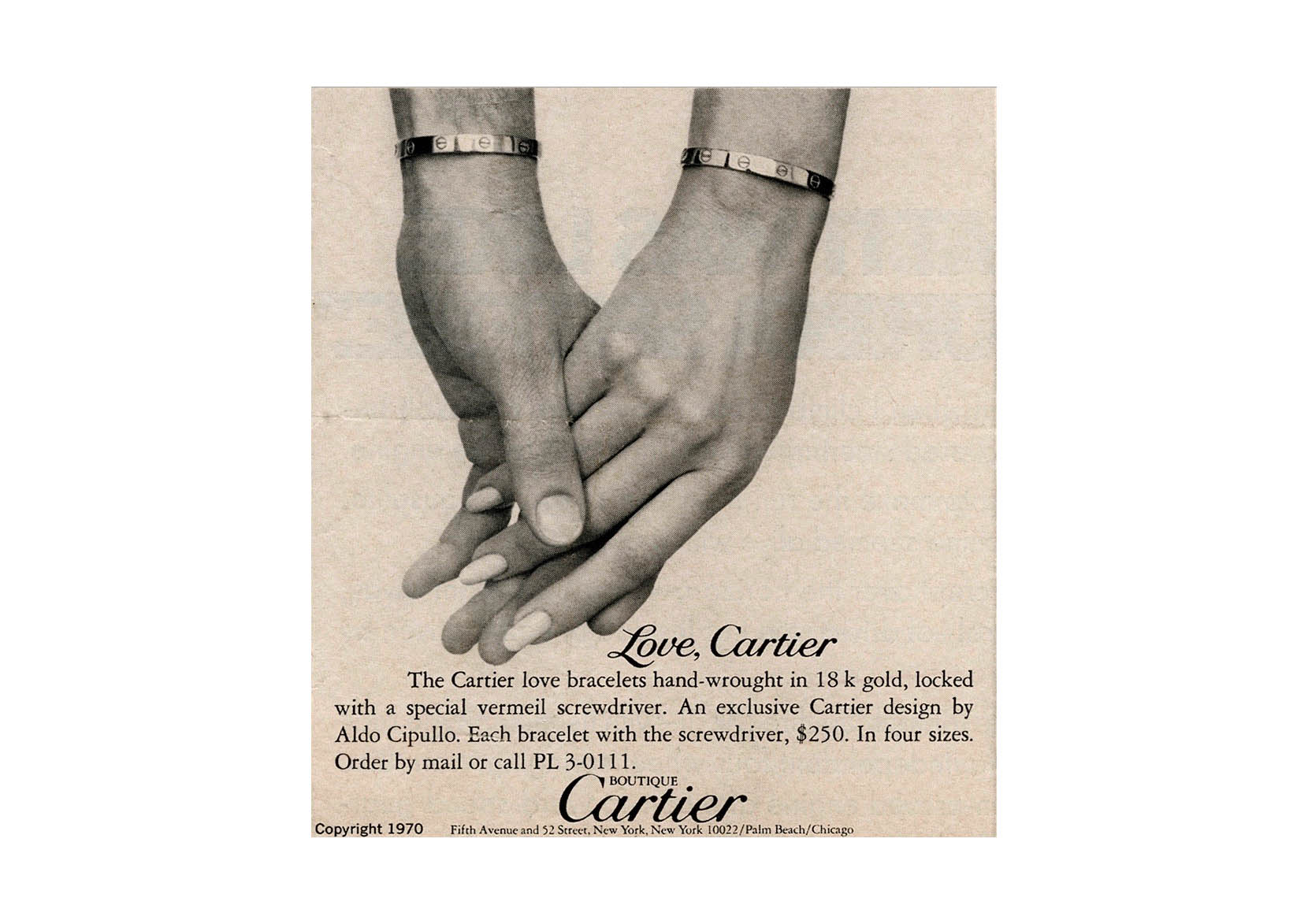 It is an emblem of truly timeless style, found on the wrists of trendsetters and fashion icons worldwide, and an instantly recognisable symbol of love and commitment. Yet it was in fact a heartbreak in the 1960s that led to the creation of the classic Cartier Love bracelet.

The story of the Cartier Love bracelet starts in 1959, when a young man from Rome, Aldo Cipullo, emigrated to New York. Cipullo started working for big American jewellery firms, including Tiffany & Co. and David Webb, and became a popular addition to the New York society scene.

He was less lucky in love, however, and one night a relationship sadly came to an end. Heartbroken, retreating to his studio at 3am, Cipullo came up with a design for a bracelet that symbolised the permanence of love. A jewel that couldn’t just be slipped off. He fused jewellery and industry; installing screwheads on the bracelet to make it extremely difficult to take off.

“What modern people want are love symbols that look semi-permanent, or at least require a trick to remove,” Cipullo once said of his design, which requires a miniature screwdriver to assist in securing or removing the bracelet. “After all, love symbols should suggest an everlasting quality.”

At the time of designing this bracelet, Cipullo was working for Tiffany, and wore a version on his own wrist. Despite enthusiastic feedback from friends and colleagues, the firm didn’t pick up the design. No matter, as a few months later, in 1969, the designer made the move to Cartier and pitched it to them as his first design with the company.

This was an interesting time for Cartier, and the Fifth Avenue Maison in particular. In 1962, Claude Cartier sold the New York branch, and for the first time since 1847 a Cartier branch was no longer owned by the Cartier family (the Paris and London branches would follow shortly thereafter). The new owners wanted to target younger customers and bring “new life and new blood” to the firm, as Francesca Cartier Bricknell notes in her book The Cartiers: The Untold Story of the Family Behind the Jewelry Empire.

Cartier always had a very strict policy of not permitting designers to sign their works, but with the change of ownership a new direction was taken. Following in the footsteps of their rivals Tiffany, which had been championing their designers, including Jean Schlumberger and Donald Claflin, for years, Cartier allowed Cipullo to sign his work, believing it would add a personal touch that would resonate with young consumers. Aldo Cipullo would be one of only two designers ever given this honour by Cartier. The other was the Vietnamese designer Dinh Van.

The launch of the Cartier Love Bracelet was a marketing triumph. Originally, the bangles were made as a set for couples. One couldn’t just walk into Cartier and buy a Love bangle for oneself, it had to be bought as a gift. To reinforce the message of commitment, Cartier styled the bangles as the chic, must-have accessory for famous lovers.

If Cartier could have given a pair to Romeo and Juliet, it would have. Instead, it settled for 25 globally famous couples. The Duke and Duchess of Windsor, Elizabeth Taylor and Richard Burton, Steve McQueen and Ali McGraw all received pairs, and many of the celebrity recipients continued to wear them for years to come, perpetuating their desirability.

It is important not to overlook just how drastically different this bangle looked to the vast majority of fine jewellery offerings at the time. The design is Spartan in its simplicity: a plain oval band of gold, with screwhead motifs borrowed from the Cartier Santos wristwatch. When initially released, the bracelet was made only in 18ct gold and was sold with a gold vermeil screwdriver. Four different sizes were available for him and her, and the Love bracelets cost $250.

Cartier quickly did away with the romantic limitations on purchasing just for others, and eventually the brand expanded the range. Since 1970, the Cartier firm has grown almost beyond recognition, but the Love bangle has remained a key part of its portfolio for 50 years.

One of the more unexpected elements to this story was the fact that Cartier allowed Cipullo to collaborate with an outside producer and release another version of the Love Bangle. Robert Kenmore, the chairman of the Cartier holding company Kenton Corp, shared with Cipullo an appreciation for a good marketing opportunity. In 1970, the same year as the Cartier release, Cipullo partnered with Charles Revson, the founder of Revlon Cosmetics, to release a gold-plated version of the Love Bracelet. These mass-market alternatives provided the look for less and added to the widespread desirability of the design.

Cipullo went on to design a number of other innovative jewels for Cartier. Another of his designs of note was the Juste un Clou bangle (which translates from French as ‘just a nail’) that launched in 1971. At the time, however, the bangle was not considered to be a commercial success and very few original 1971 pieces were made. Although in testament to the idea that good design never goes out of fashion, in 2012 Cartier relaunched Juste un Clou to much acclaim, and it now forms one of its core offerings.

The Cartier Love bangle was undoubtedly Cipullo’s most successful design, across all the mediums he worked with – leather goods for Lord & Taylor, china, furniture; he even designed a swimming pool. Cipullo only spent five years as part of the Cartier family and, sadly, in 1984 he died at the age of just 42, but he leaves a lasting legacy in how we see love in a bejewelled form. The simplicity and strength of his designs ensure that he will always be a part of the Cartier story.

Sarah Duncan is an antique and vintage jewellery expert, and is the head of the jewellery department at Chiswick Auctions 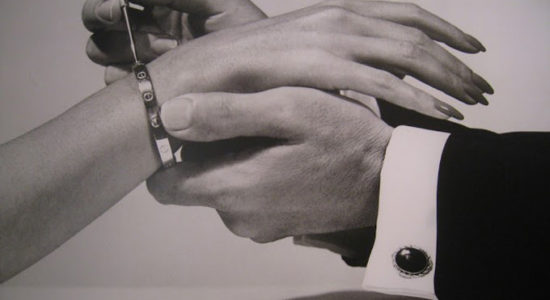 The Cartier Love bangle is a jewellery classic, designed to be worn by both men and women as a symbol of commitment 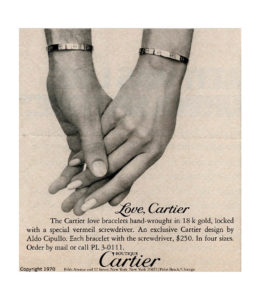 A Cartier Love bracelet ad campaign from the 1970s 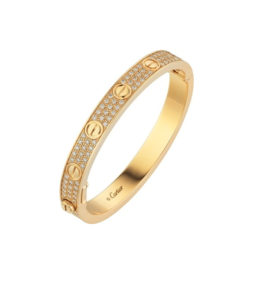 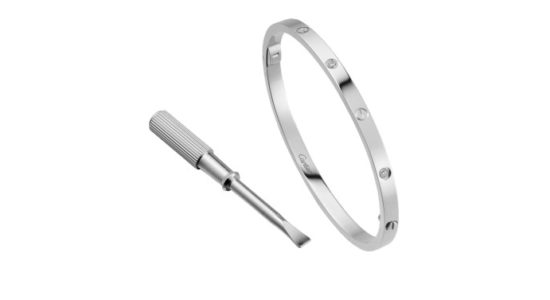 What modern people want are love symbols that look semi-permanent, or at least require a trick to remove. After all, love symbols should suggest an everlasting quality 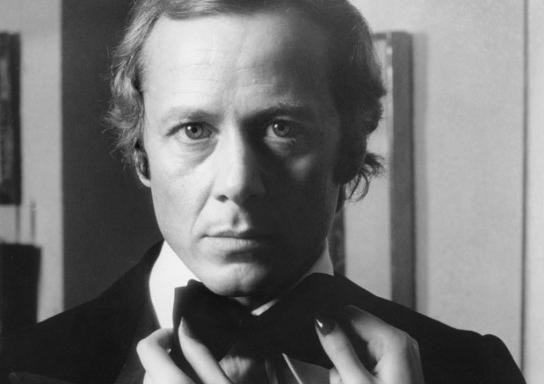 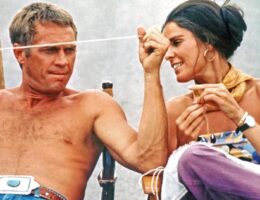 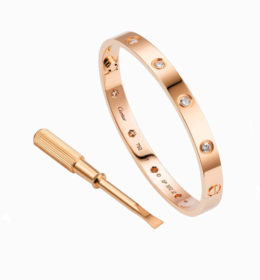 I always wondered about who designed the love bangle bracelet s with tiny screws on it so simple but who? I thought it was a mechanic or something for a machine or for something that was part of something else I did not know only sold for a couple. Then redone with another company. I see fashion magizine and would always see it . I like it! Modern. Real look.

I am in a same sex marriage and we are inseparable. My God this is the absolute perfect bracelet for both of us. Sadly, Cartier is out of my price range. It’s a stunning, yet simple piece of expressed love that in my opinion shows strength and that the love is forever locked

The Cartier Love bangle is a jewellery classic, designed to be worn by both men and women as a symbol of commitment

A Cartier Love bracelet ad campaign from the 1970s