With a bold new collection of handcrafted engagement rings, this emerging talent is stepping out of her famous father’s shadow 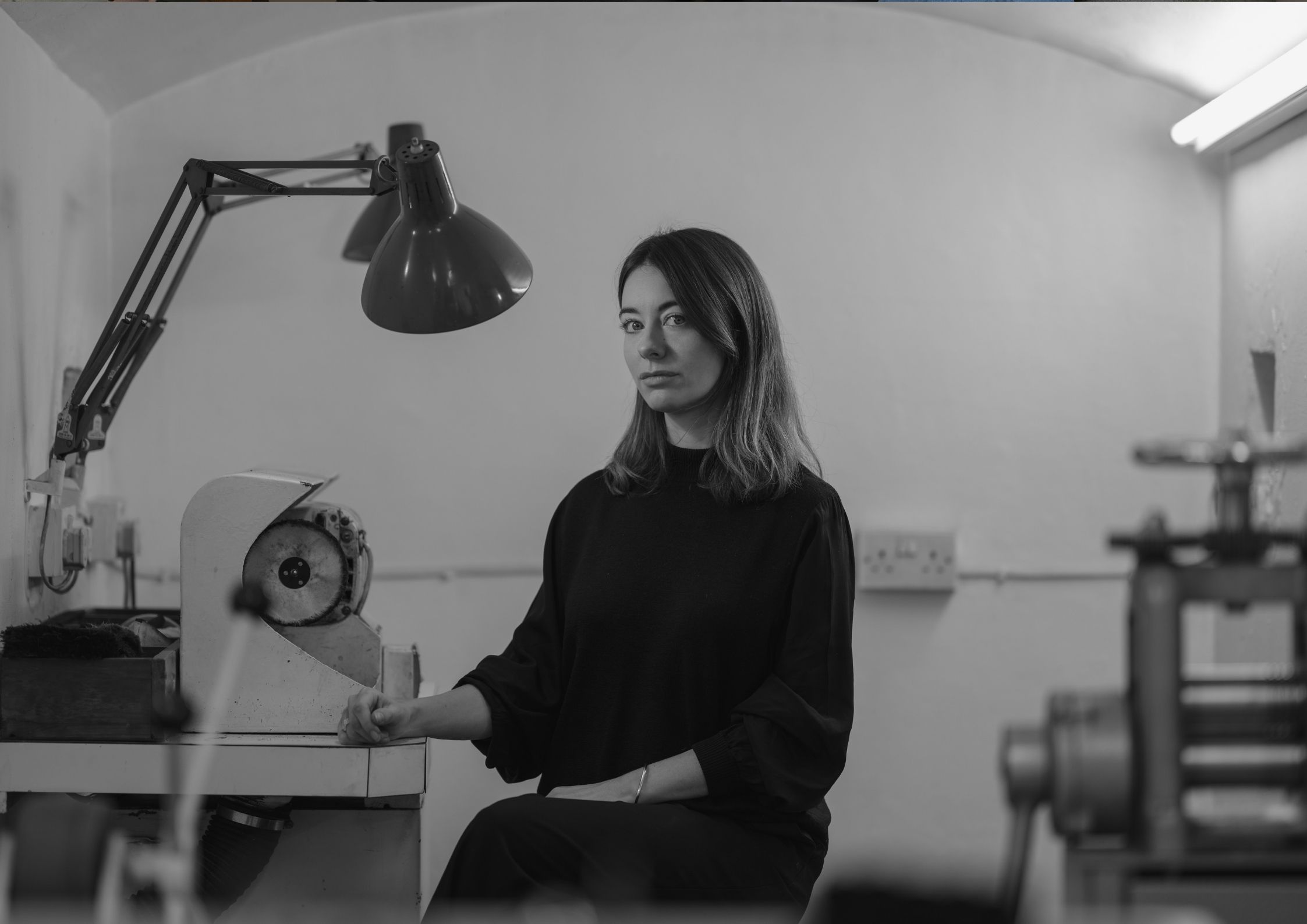 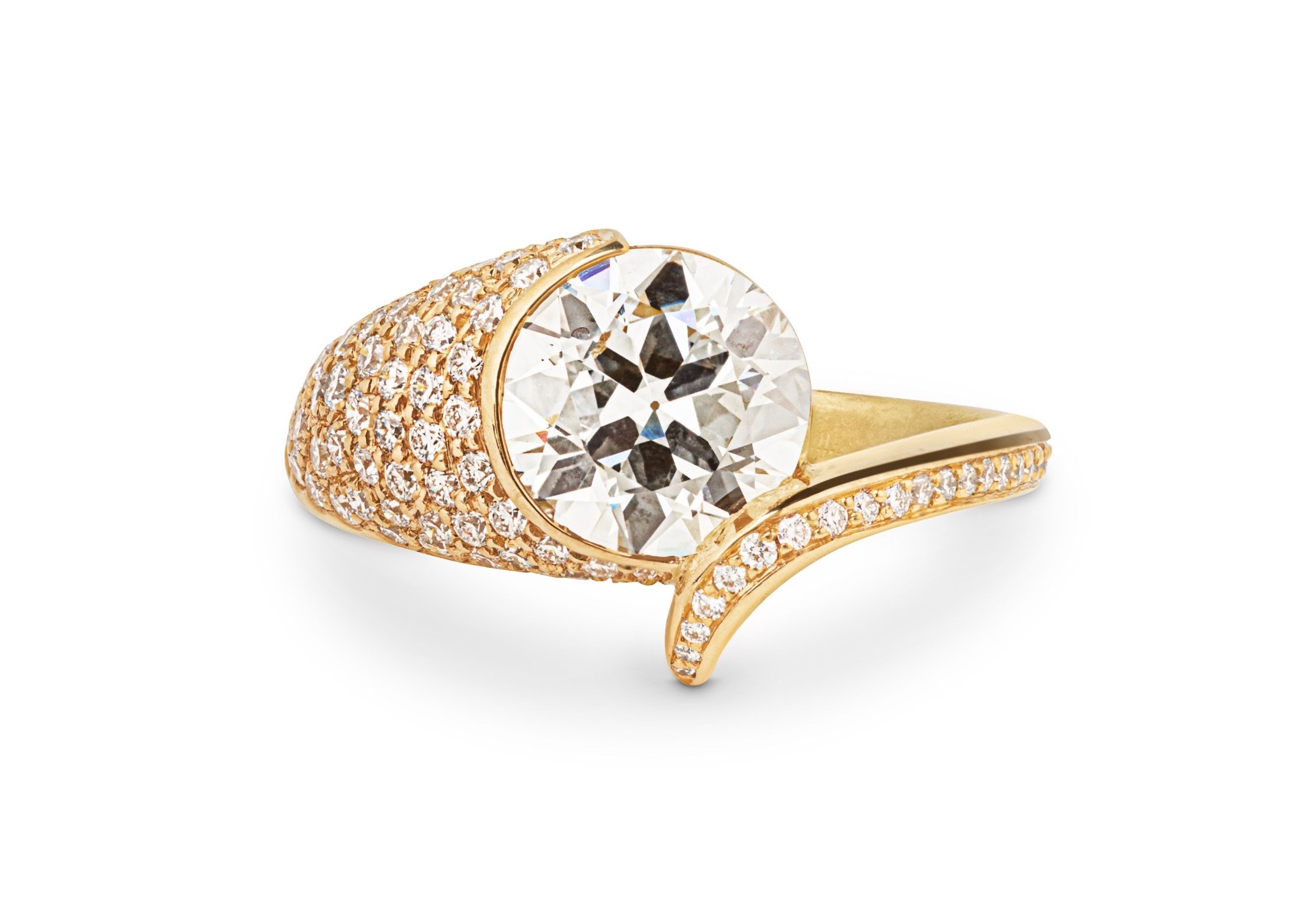 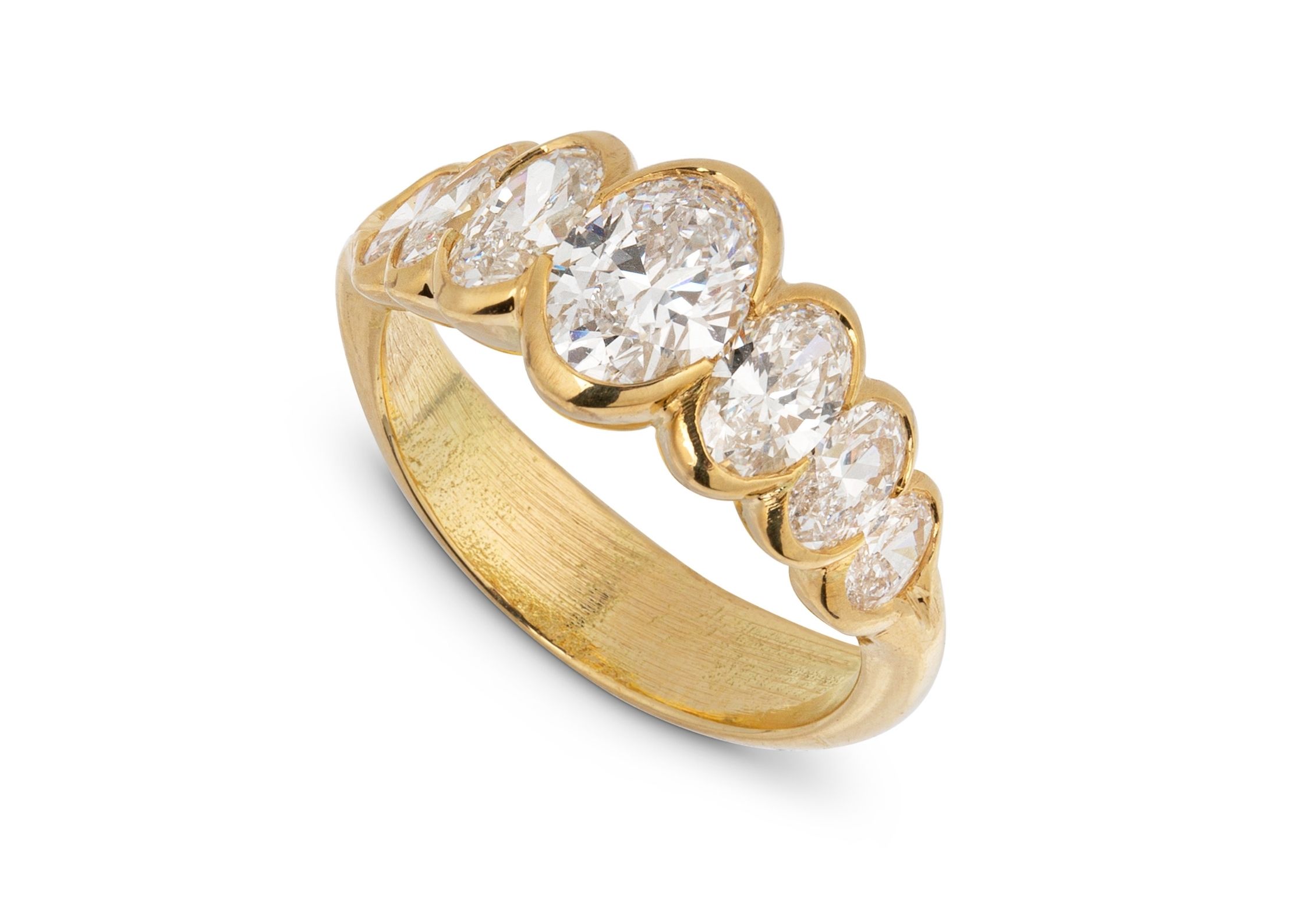 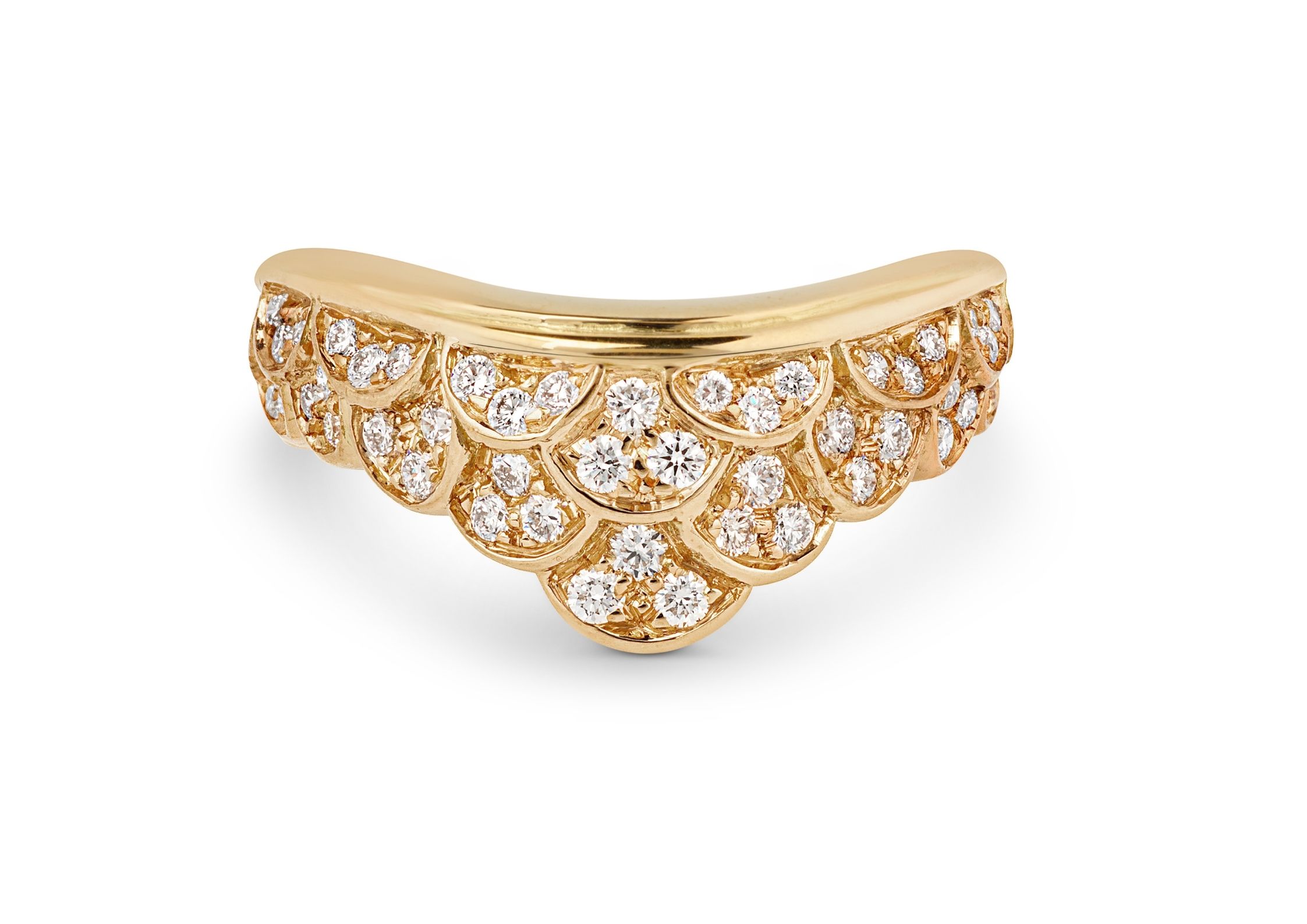 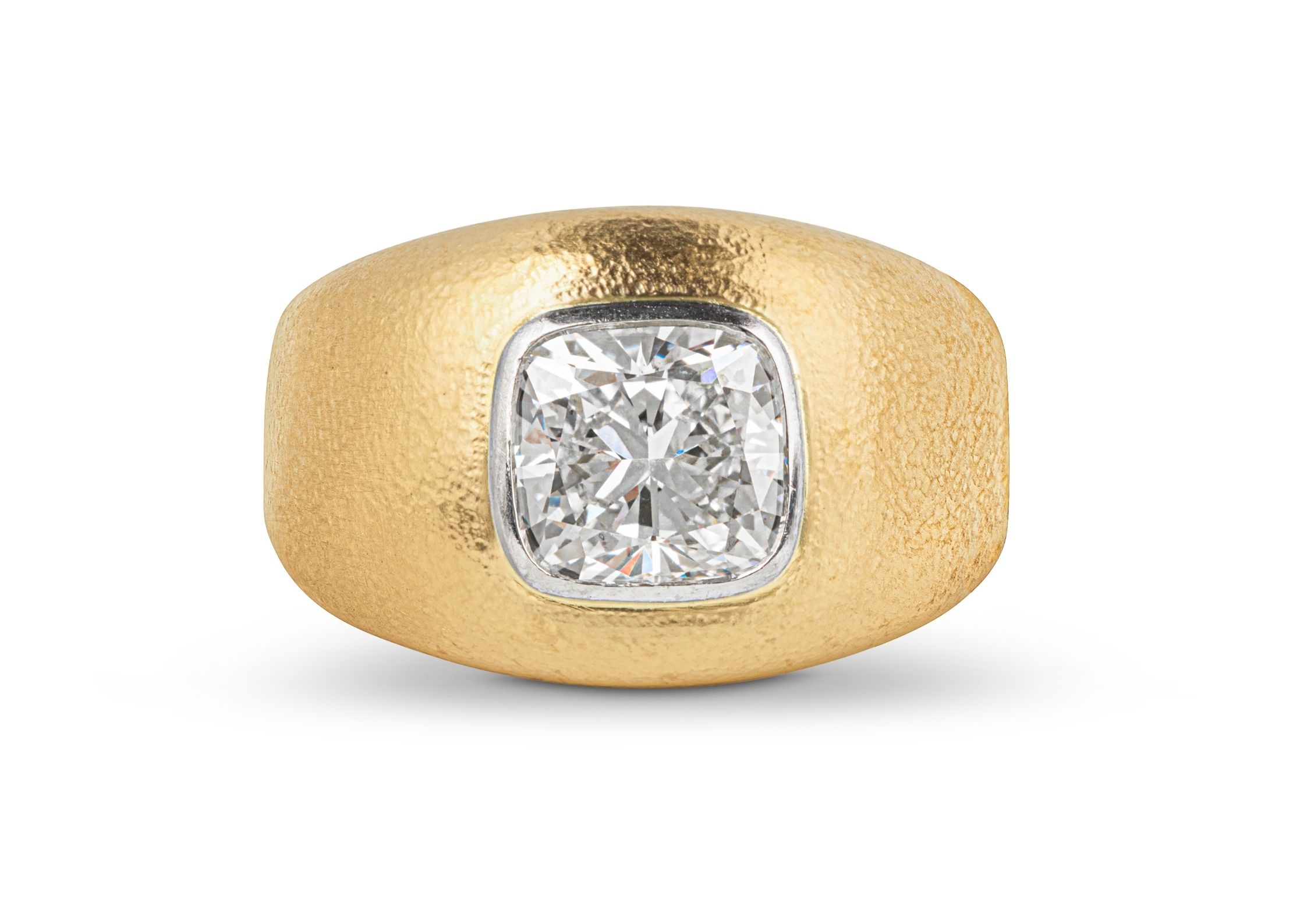 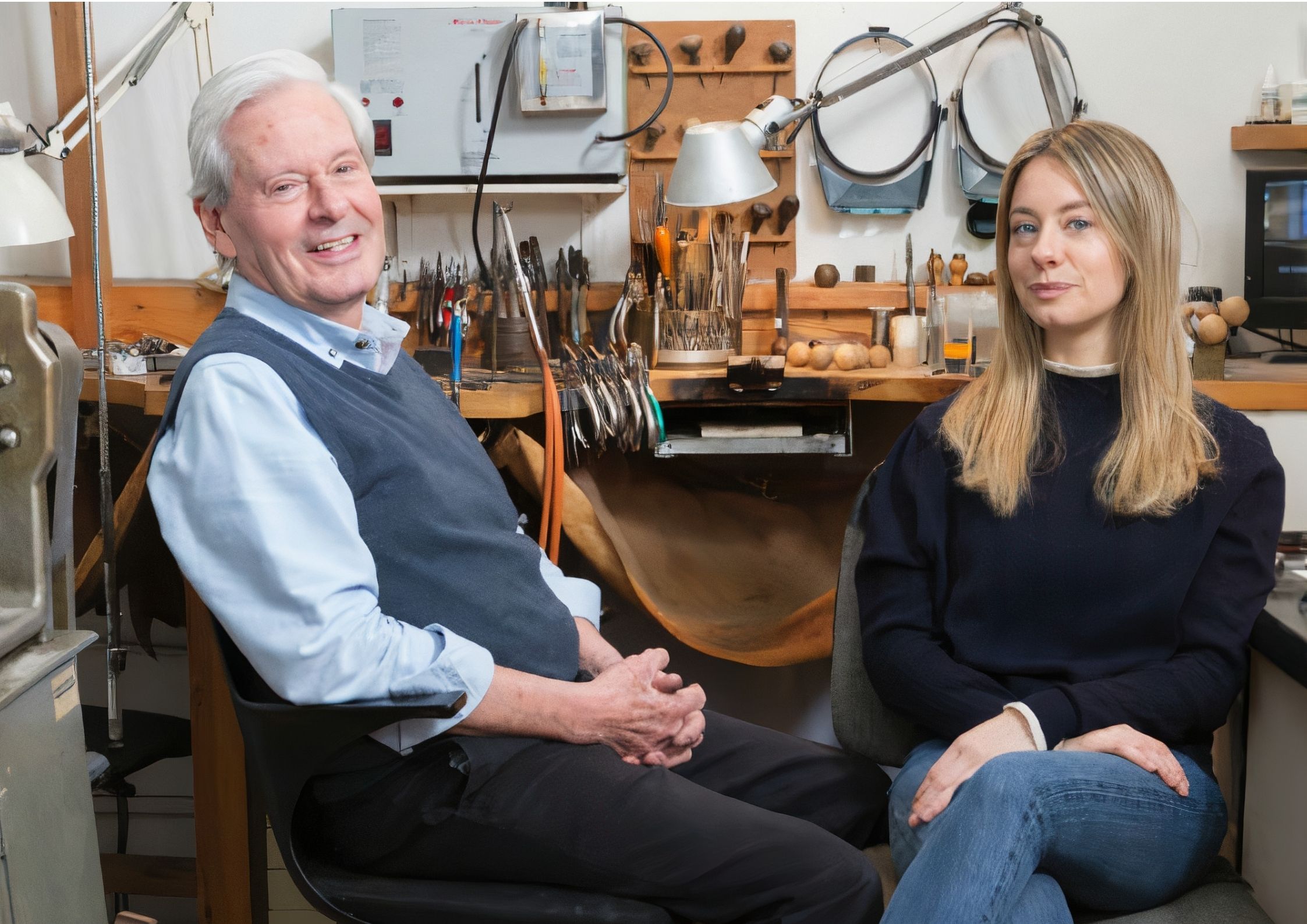 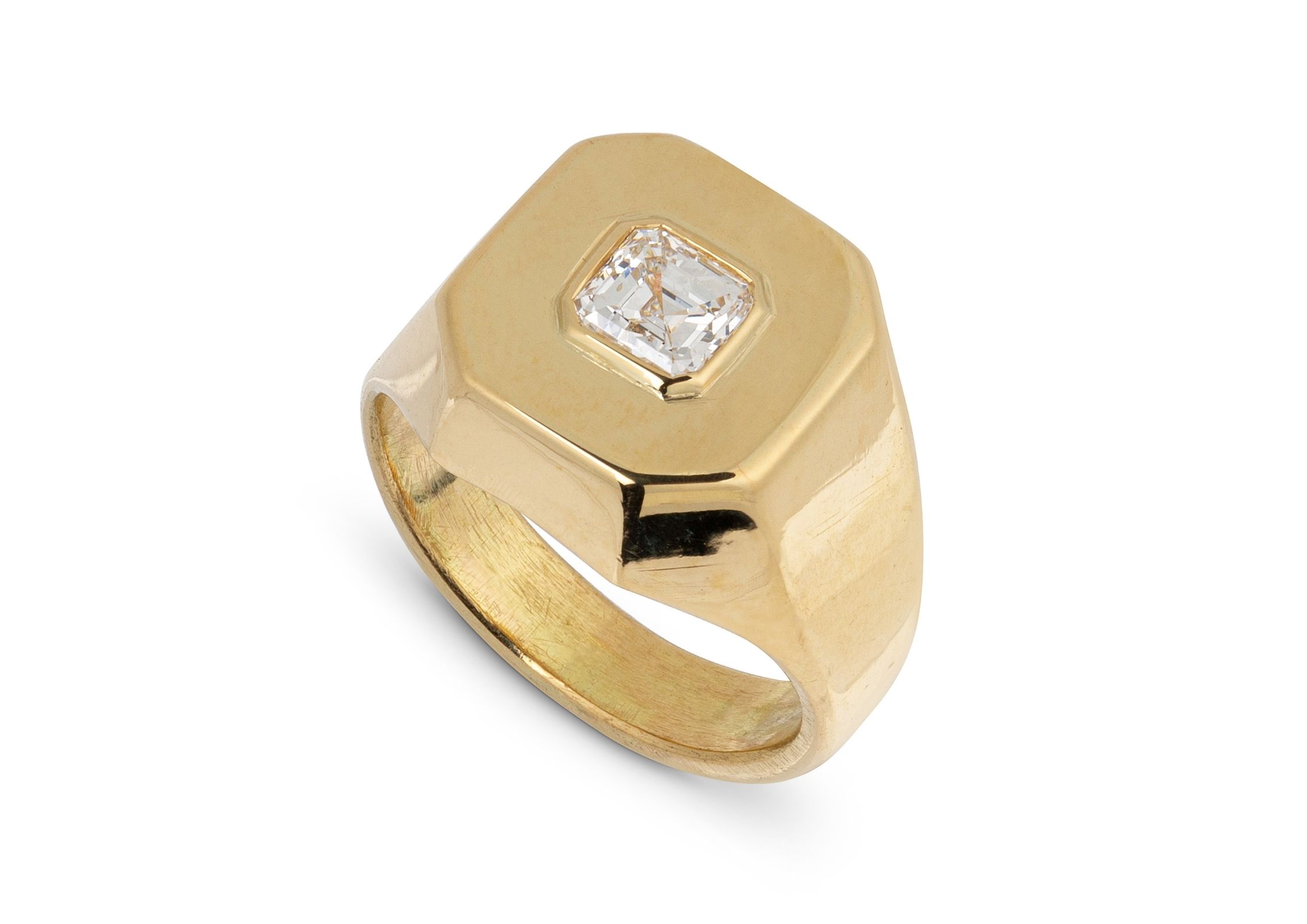 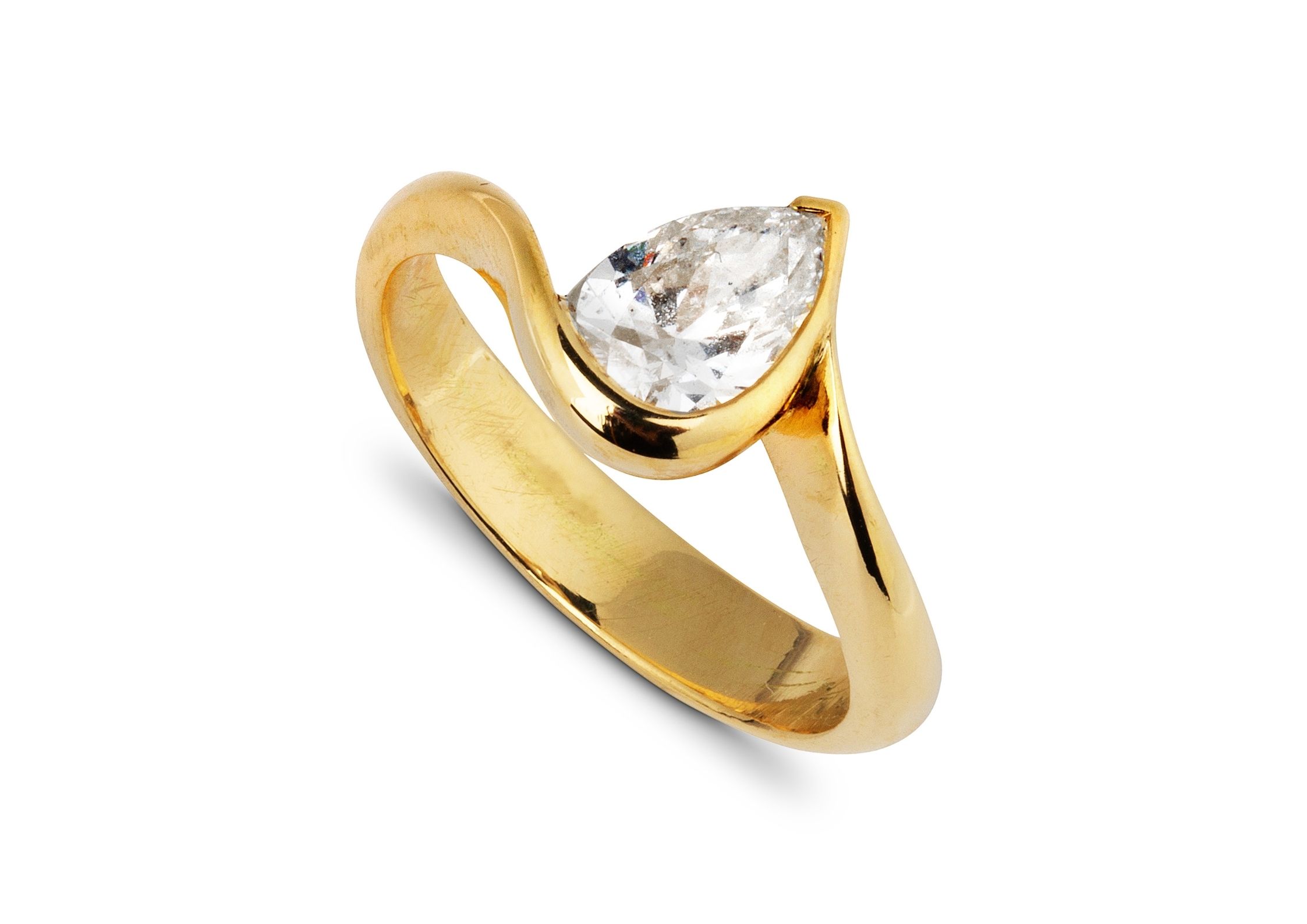 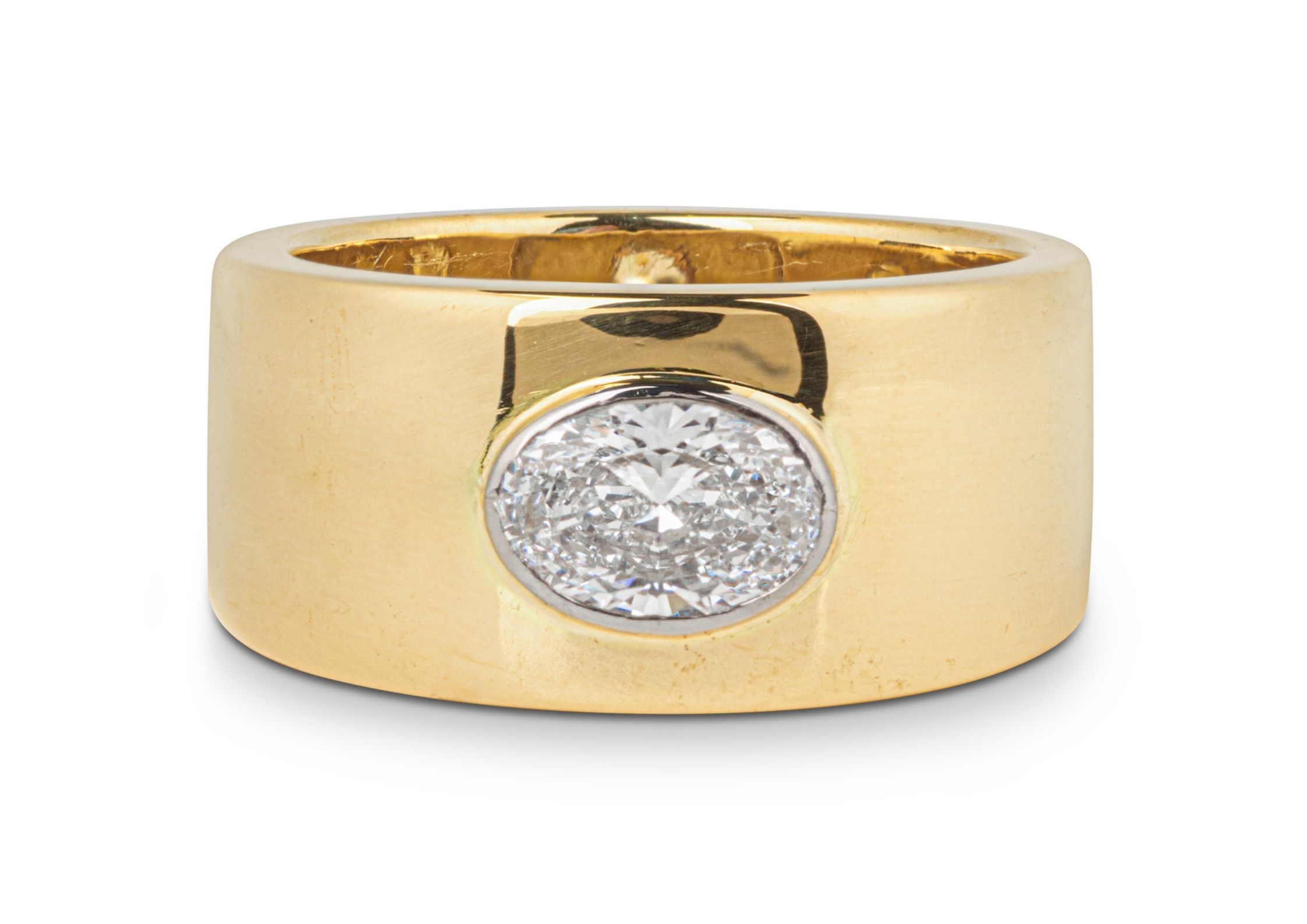 One of the newest designer-makers on Pimlico Road in London’s Chelsea is Jessie Thomas, daughter of famed master goldsmith and one-time Crown Jeweller, David Thomas. Step inside the charming shop that bears her father’s name, and you’ll find Jessie showcasing her own jewellery collection alongside David’s.

The store’s classic aesthetic is welcoming, and the space is adorned with framed gouache of David’s jewellery, which he would paint to accompany bespoke commissions. It an art form that is less called on by today’s jewellery collectors, says Jessie, who will instantly put you at ease with her self-effacing charm and warm personality.

While many of the painted jewels on the wall are large, elaborate designs that reflect the daring 1960s style of goldsmithing that David made his name upon alongside peers such as Andrew Grima and John Donald, Jessie’s own design aesthetic is more minimalist. Her mostly gold and diamond handcrafted jewellery collection is filled with simple, infinitely wearable pieces that you won’t want, or need, to take off. 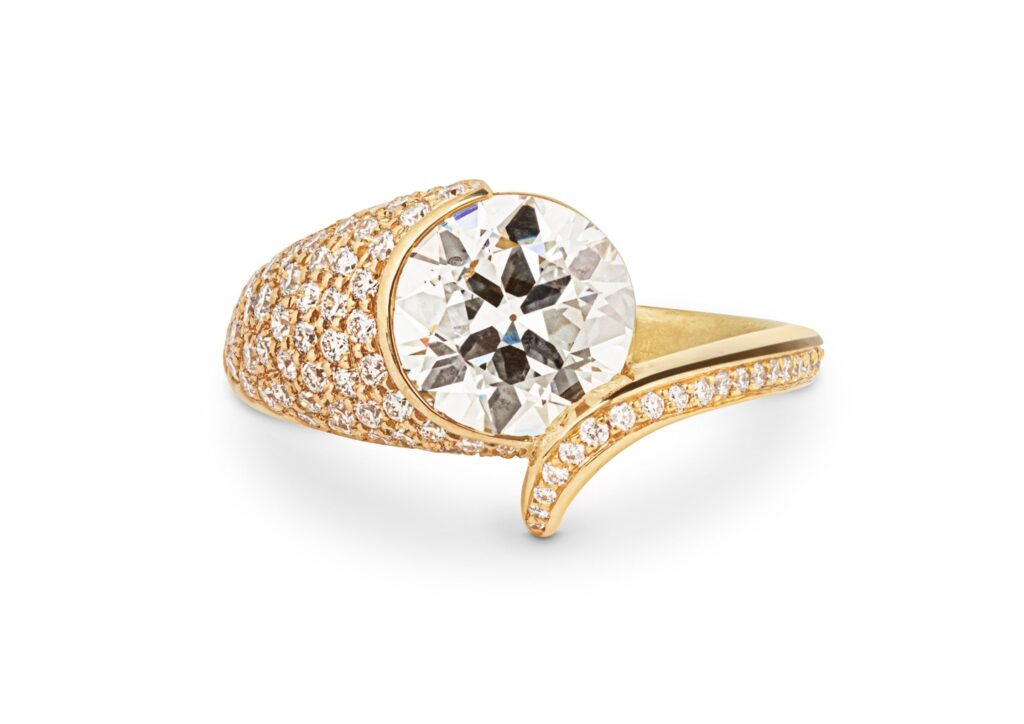 During the pandemic, Jessie has focused on creating a collection of engagement rings, although she’s keen to point out that they don’t need to be restricted to nuptials. Each one has the most incredible sensation of heft, while still feeling perfectly balanced. The yellow gold and diamond rings, handcrafted by Jessie in her studio, star oval, round, pear- and cushion-shaped diamonds that offer varying levels of sparkle. A mini 0.16ct round brilliant in a plump bezel setting offers a subtle sheen, while a 2.03ct old-cut round brilliant is all-out bling, complete with a curved, diamond pavé tail-like shank that whips back round to create a floating setting for the central stone.

“I currently love a pear,” muses Jessie. “A really beautifully cut pear is quite hard to find, but when you see one it’s so full of life and very special. They are also interesting to design around – the curve into a point lends itself well to designs with a lot of form and movement.”

Demonstrating this point, one of her engagement ring designs is a sculptural wide band in 18ct yellow gold with a pear-cut diamond set at 45 degrees. The diamond is nestled in one of the undulating curves of the band, which give the illusion of movement. Another ring features a large pear-cut diamond looped by serpentine setting – the matte gold has been textured to create a snakeskin effect. 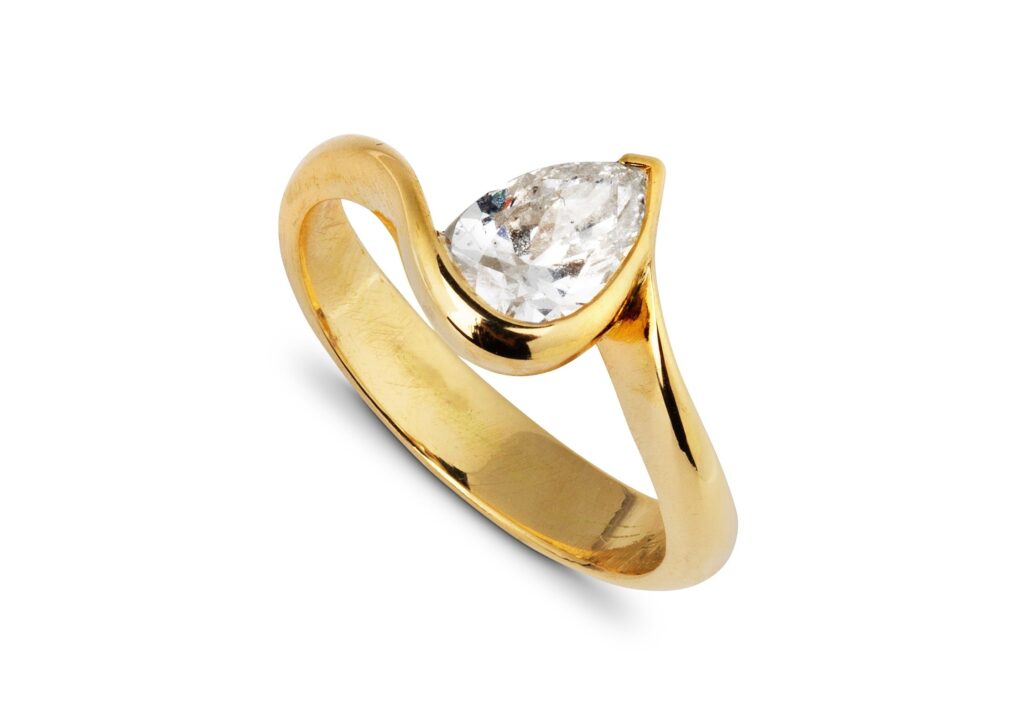 Many of Jessie’s pieces – some of which are now selling through online jewellery store Finematter – are simple and bold, which allows them to crossover into multiple categories. One such design features a cushion-cut diamond set into in a sumptuous 18ct yellow gold bombé ring – a curvaceous style that originated in the Edwardian era. This particular design could be an engagement ring, a pinky ring, a dress ring, a milestone ring, a man’s ring… such shapeshifting is ideal in our fluid society.

Underneath the store is where the magic happens. Down the narrow stairs lies the workshop in which Jessie learned her craft, undertaking a seven-year apprenticeship with her father. Under his tutelage, she learned how to carve designs in wax and cast them in metal – a process that anchors her work today. Jessie sets all the gemstones herself, at least “the larger ones” she says with a chuckle – for smaller pavé work she calls in experts in micro setting, which is a whole other skill unto itself, she explains.

The provenance of her craft is important to Jessie; just as she likes to be involved in every step of the design and making process, she also wants to know how her precious metals and gems are sourced. “I’m not here to put out pieces that are unethical,” says the designer, who prefers Fairtrade or recycled gold and ethically sourced stones. “I work with suppliers I trust and I make everything here in the workshop by hand, so that really helps with sustainability. I also work a lot with antique [gems] and customers’ old stones, recycling where possible.” 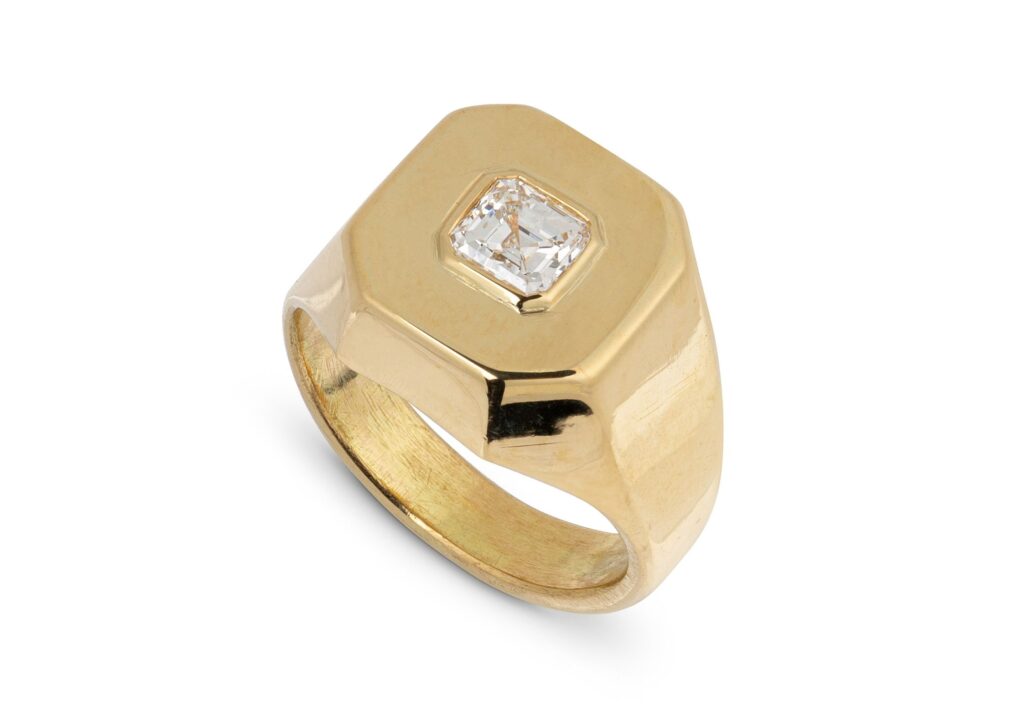 Jessie describes the Chelsea store she shares with her father as a trusted local family jeweller – David Thomas has been serving the area for more than half a century. As such, Jessie has been fortunate to work with her father’s clients as she learned her trade, and now often finds herself selling her own work to them – especially as gifts for younger relatives – while also establishing her own following.

“A lot of women buy my jewellery for themselves, which I love, as they tend to be bolder in their choices than those buying as a gift,” says Jessie, noting that there has also been a rise in self-purchasing men seeking her out for ‘just because’ jewels. “I also work with customers on bespoke pieces, anything from engagement rings to 50th wedding anniversary gifts – so there is a real span in terms of client base. I have mainly repeat clients, so someone who has bought their engagement ring will then do wedding bands followed by gifts for big milestones. It’s quite a traditional jewellery business in that way.”

Though their design style varies, the care and attention both father and daughter show towards their craft and clients is indistinguishable. This makes Jessie Thomas a worthy successor to fill the jewellery boxes of the next generation of Chelsea families, and beyond. 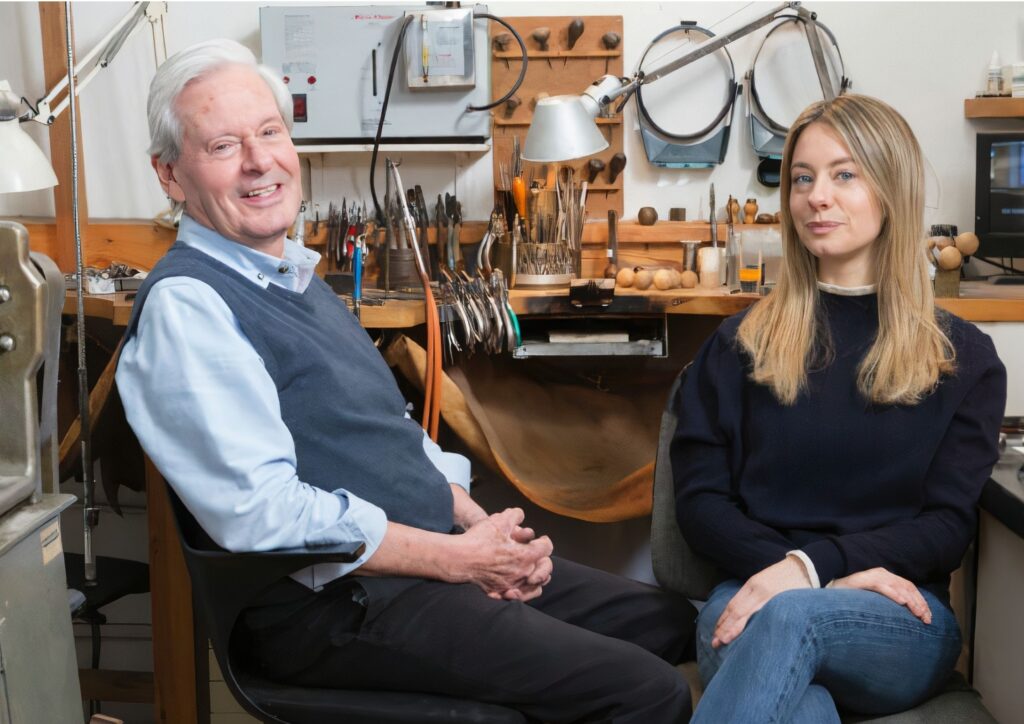