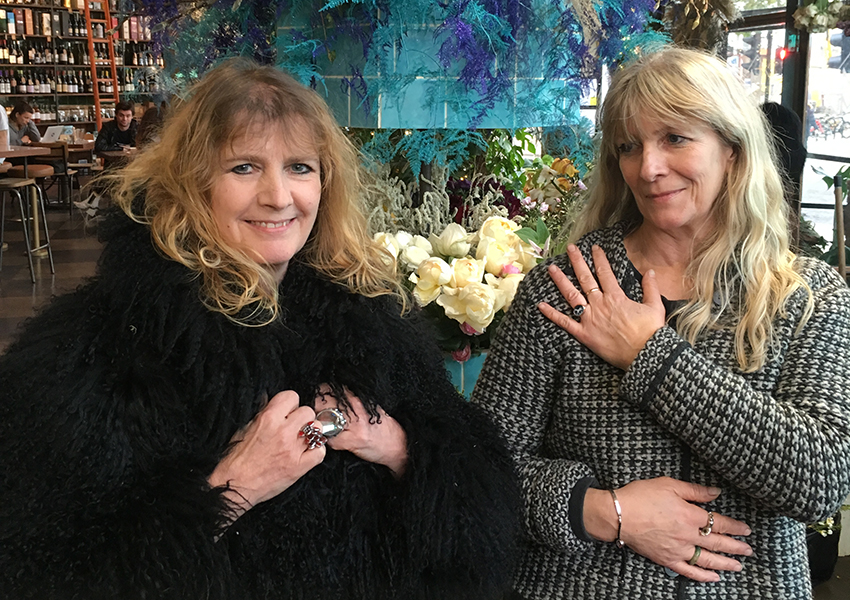 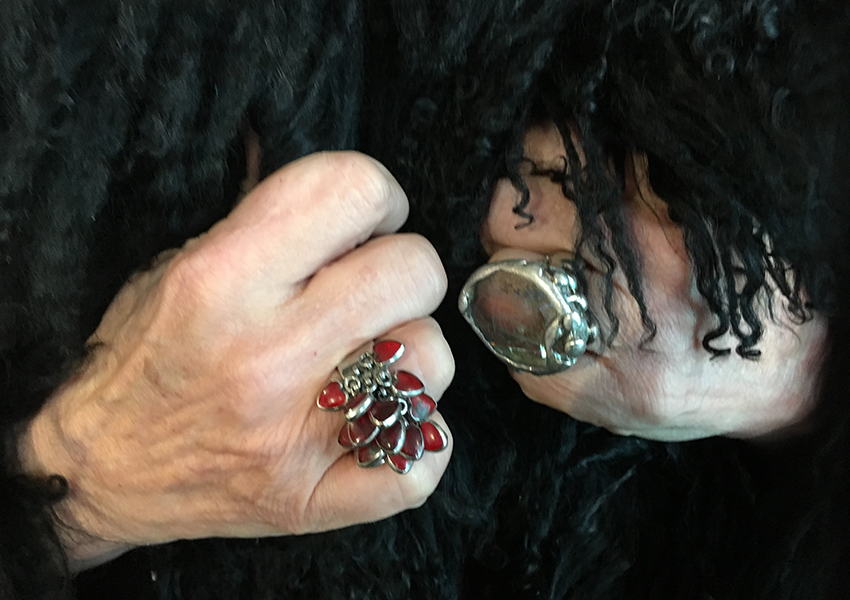 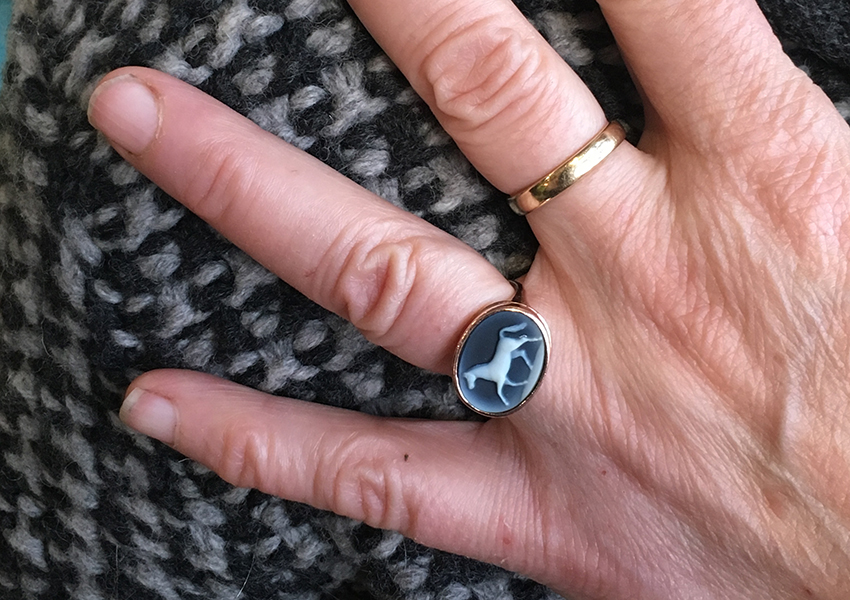 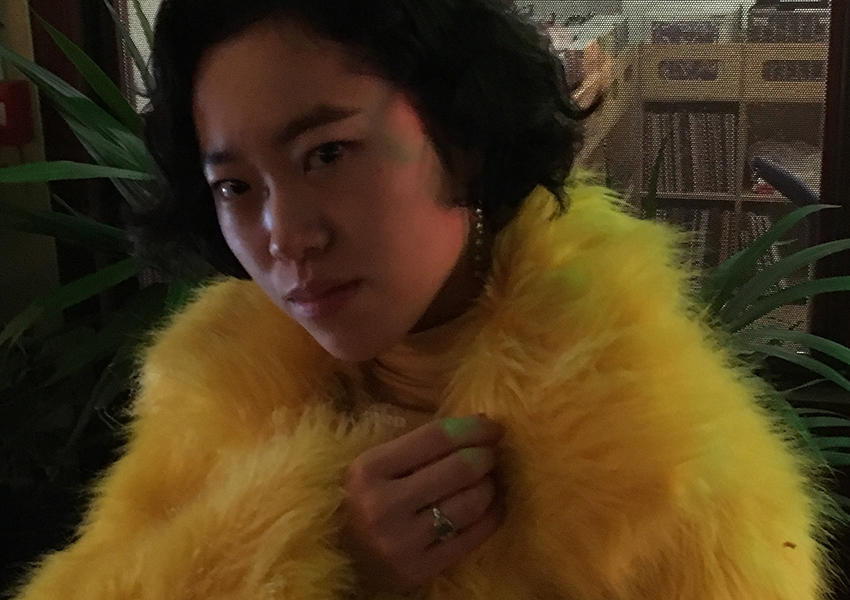 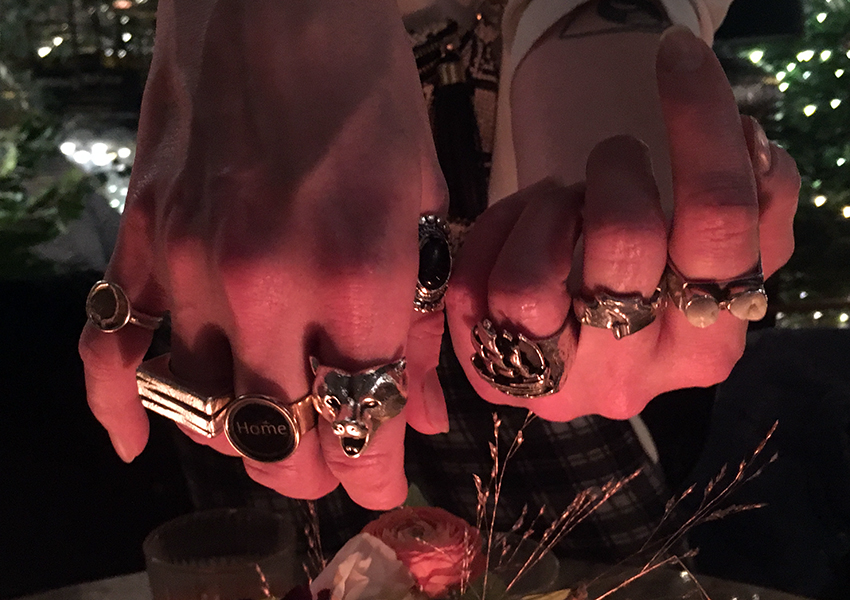 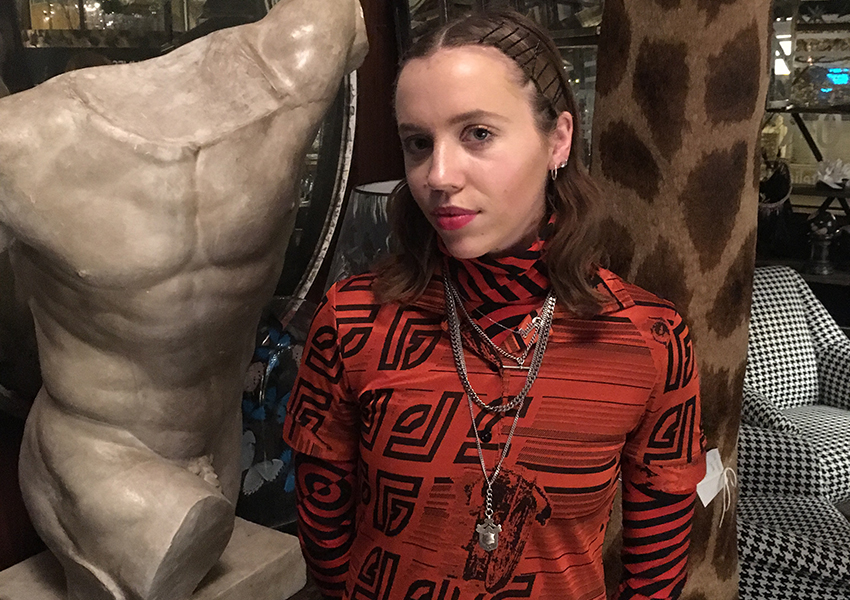 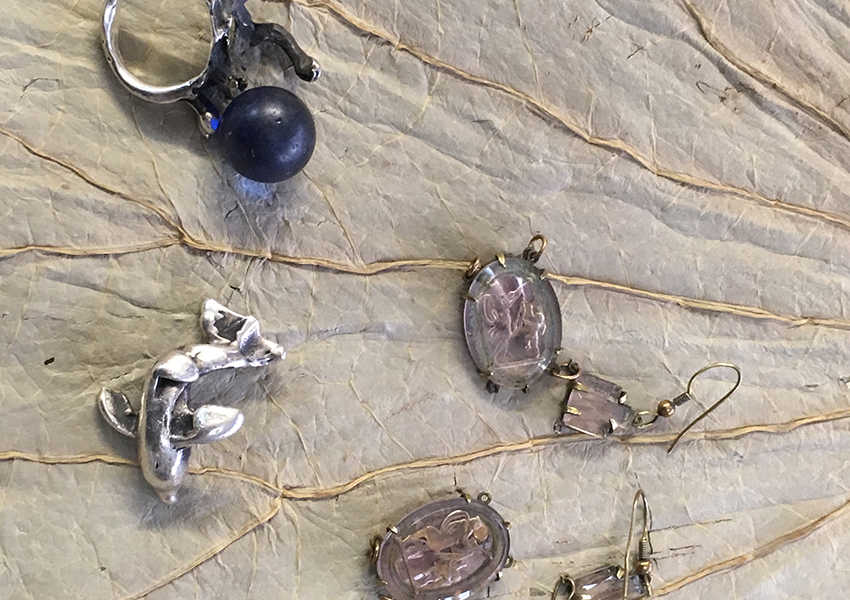 Every piece of jewellery tells a tale, and treasures crafted by small-production artisans and meaningful vintage pieces often have even more to say.

For inspiration on building your own unique collection, take a cue from the jewellery style of the ladies who work and play at Mare Street Market, the East London culinary and design hub that’s been home this December to The Jewellery Cut and The Goldsmiths’ Company’s Christmas Jewellery Pop Up Shop (on until December 17th, 2018).

The bold rings of Rebel Rebel

“I don’t believe in wearing ‘work clothes’ or ‘work jewellery’, I believe in wearing what you want to all the time,” says Athena Duncan, co-owner of Rebel Rebel Flowers at Mare Street Market. Living out her motto, Duncan’s workplace ensemble of bell-skirted red-and-black crocheted dress and voluminous, shaggy black coat puts most partygoers to shame.

What’s more remarkable about her look, given her business of fashioning blooms and leaves into floral artworks, are her two sizeable rings, one on each hand. On the left hand is a huge piece of blue-tinted, faceted glass set in an abstract silver mount.

Her partner bought it for her from a jeweller at a market in Como, Italy, years ago, and she’s been trying to track down the artist ever since so that she can order another piece. For most others, this would be a cocktail ring for occasions only, but Duncan rocks it on the daily, speaking lovingly of the exclamatory piece that is fittingly audacious for a Rebel Rebel proprietress. On the right hand is another statement silver ring that has an unabashed sweetness, topped as it is with a profusion of red glass hearts.

Mairead Curtin, Rebel Rebel’s other lead, tumbles some baubles from her purse out onto a wide ornamental leaf, and tells me they need fixing. A pair of lavender glass earrings, etched with mythological imagery, requires soldering, and a silver ring is in pieces. Its centerpiece, a blue-black marble, rolls about, and Curtin explains that the ring has had several incarnations. She bought a claw-set marble ring in the 1980s from a Canadian designer selling in Paddington Market in Sydney, Australia, and eventually the marble fell out.

When brought in for repair, the artist insisted on recreating the ring instead of replicating the previous design, and Curtin was treated to a completely new style, with a dolphin curling proudly around the glass orb. She adored the new ring even more, and longs to have it back on her finger after it has been repaired.

Perhaps missing its aquatic friend, an agate cameo horse trots on Curtin’s left hand in a ring by London jeweller Laura Lee.  “I can’t get it off,” she says without worry. The ring was a gift from her partner Dean, and is the most recognisable design of her collection.

Filmmaker Ummmi uses Mare Street Market as an occasional workspace. She, too, has an eye for the bold, and her canary-yellow coat pulls my eye from across the room. Her jewellery mantra is strange earrings, simple necklaces.

Today, her jewels err on the more discrete side. Her silver drop earrings were an Etsy find, and the simple chain she favours is hidden from view. The one constant is a vintage silver Return to Tiffany ring; its round, engraved plaque curving over the ring finger of her right hand. Given to her by her father, it was a gift to him from his late best friend, but it didn’t fit his hand. Ummmi wears it in memory of the friend and as a symbol of her bond with her father.  To her, it is also an amulet – it staves off feelings of drunkenness, she tells me.

Antique and décor emporium Pure White Lines attracts a stylish clientele, and staffer Julia de Courcy caters to their design whims and fancies. Bedecked for a Mare Street Market fête, I find her with several chains about her neck.  Her sister is notable Vancouver jewellery designer Anna de Courcy, and Julia is proud to show off one of her sibling’s creations. It is a necklace fashioned in part from an Albert pocket watch chain and a vintage British pendant. Another chain was discovered at Portobello Road Market, and both glint alluringly in the chandelier light against her Jean Paul Gaultier frock.

De Courcy’s friend Kat Manning, reveling at the same soiree, opts for a more-is-more approach with her rings, with one on almost every finger. There’s a Virgin Mary ring with the virgin long missing, a bear ring from a ex who mistook it for a panther (they’re still on good terms), and one that reads ‘Home’ from her mother, who wishes for her to return to her native Australia.

Manning champions her homeland’s jewellers, proudly speaking on her ship ring from Melbourne artist William Llewellyn Griffiths of Metal Couture, and a human tooth ring by Polly van der Glas, who is known for setting jewellery with materials that have fallen from the body. Manning even designed one ring herself; the four lines in the top of the wide silver bar representing major events in her life.

Why does she wear so many rings?  Her mother wears multiple rings, and the click-clack of her own rings produces the sound her mother’s hands would make. It’s a comfort and a reminder of home, far away as she is from her birthplace of Cairns.