A history of hand motifs in jewellery

As touch becomes untouchable, contemporary jewellery designers are picking up a century-old Surrealist trend by carving hands in jewellery 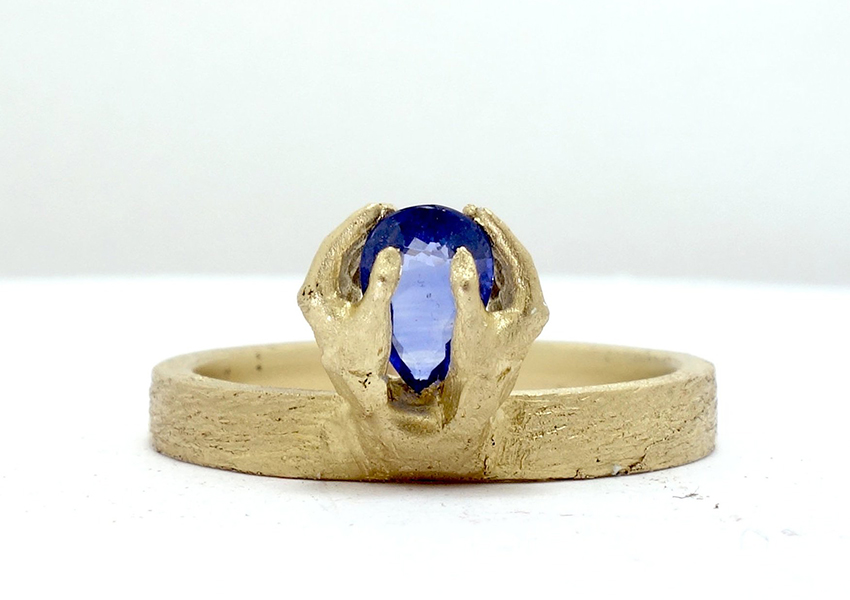 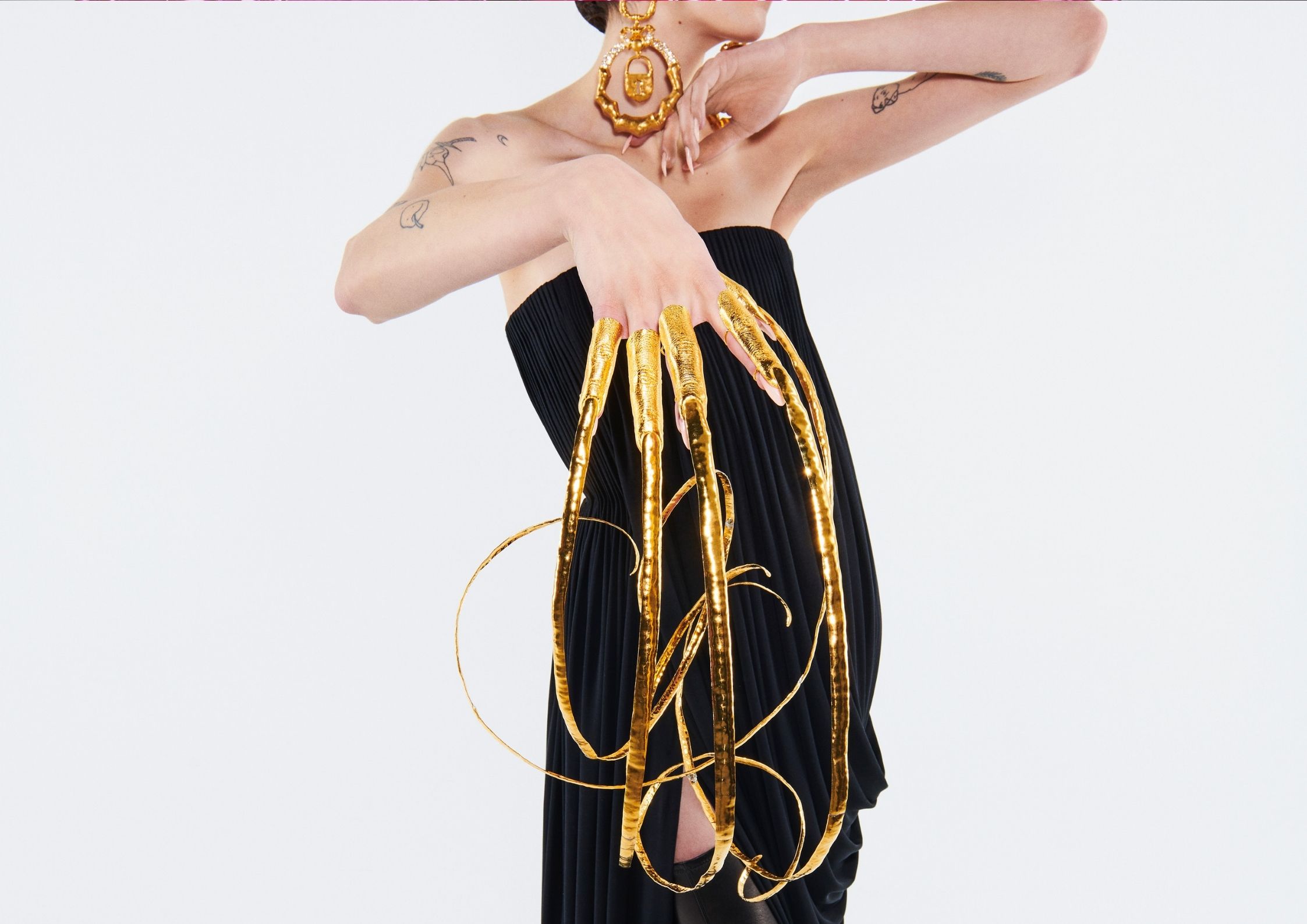 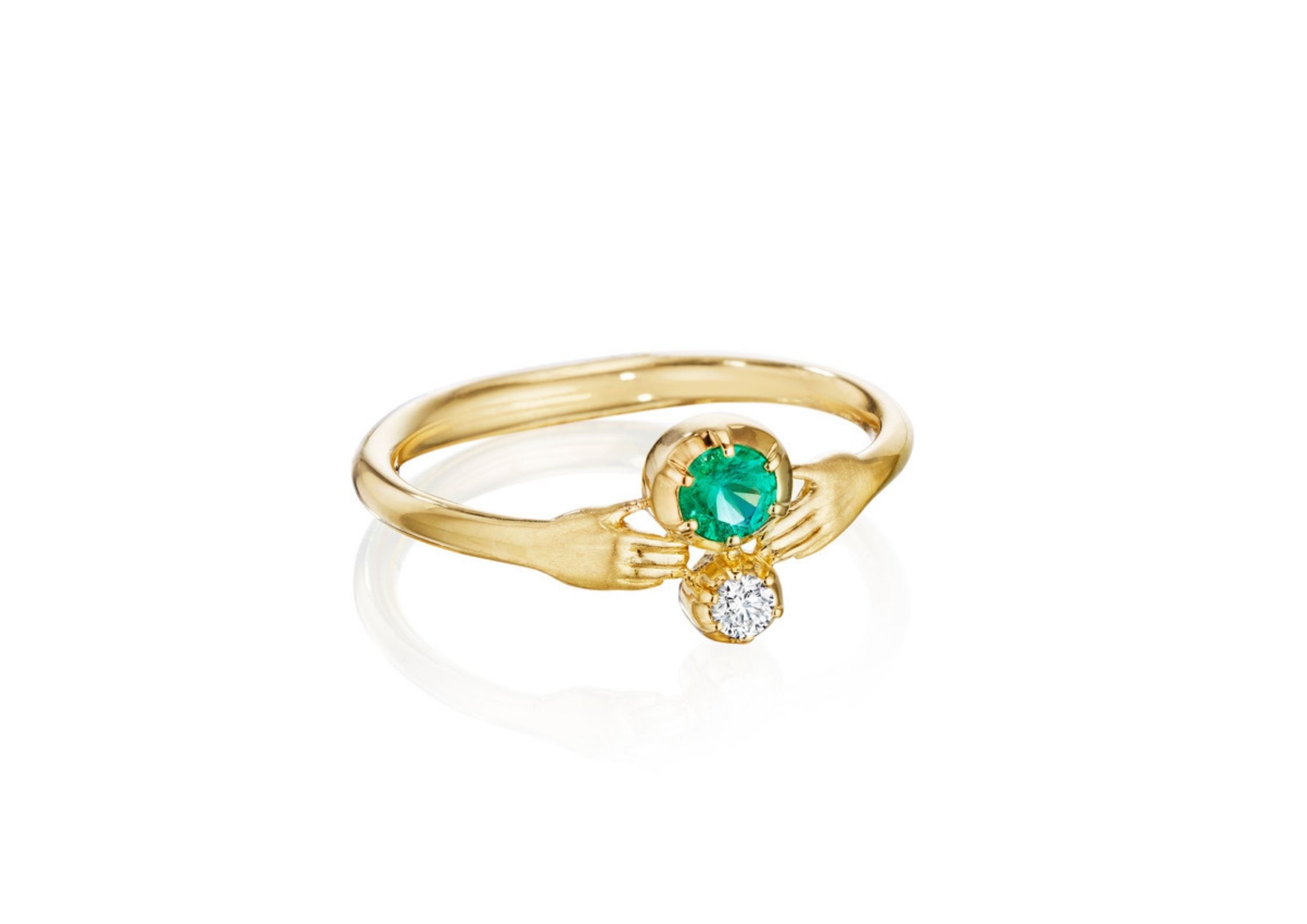 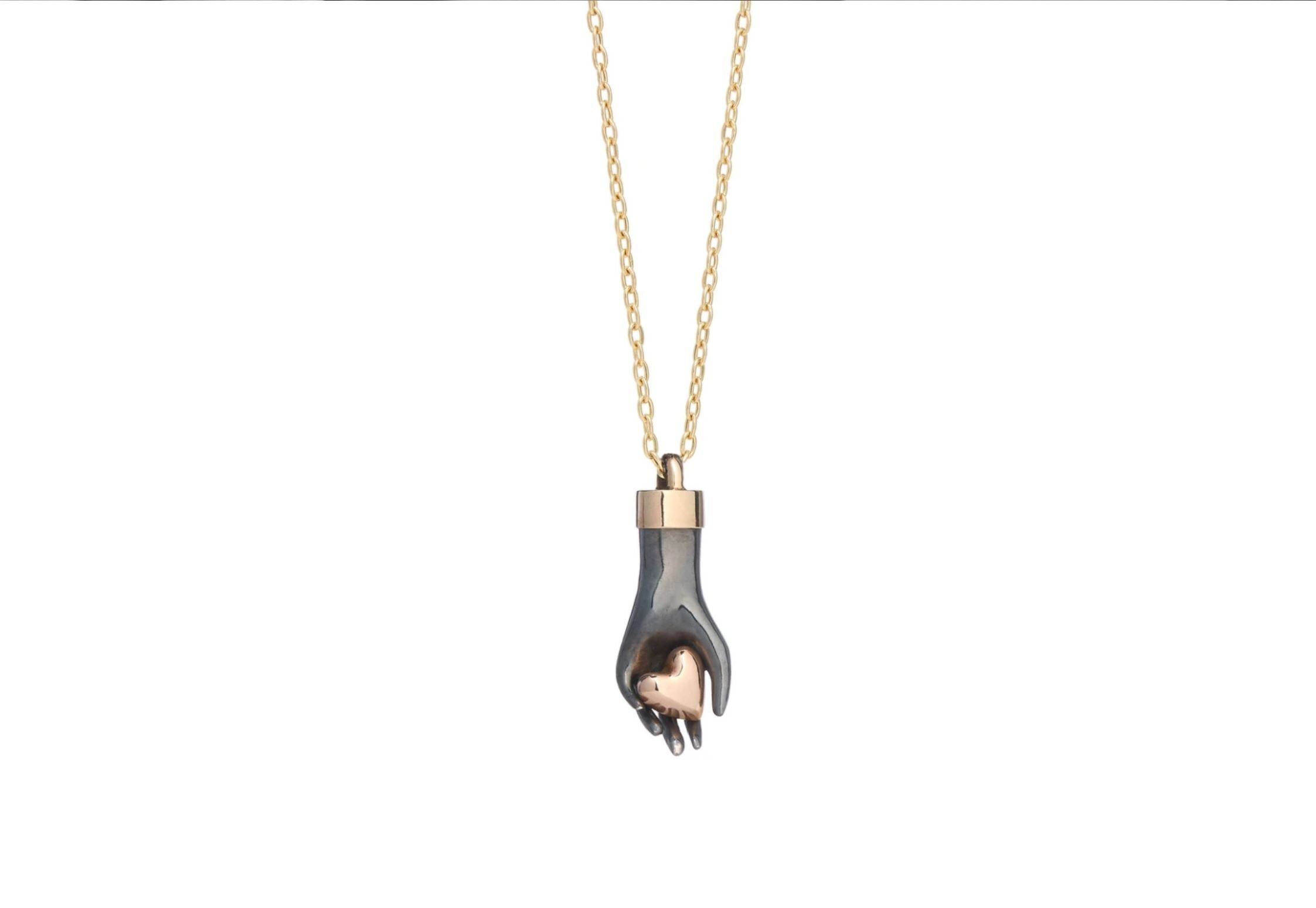 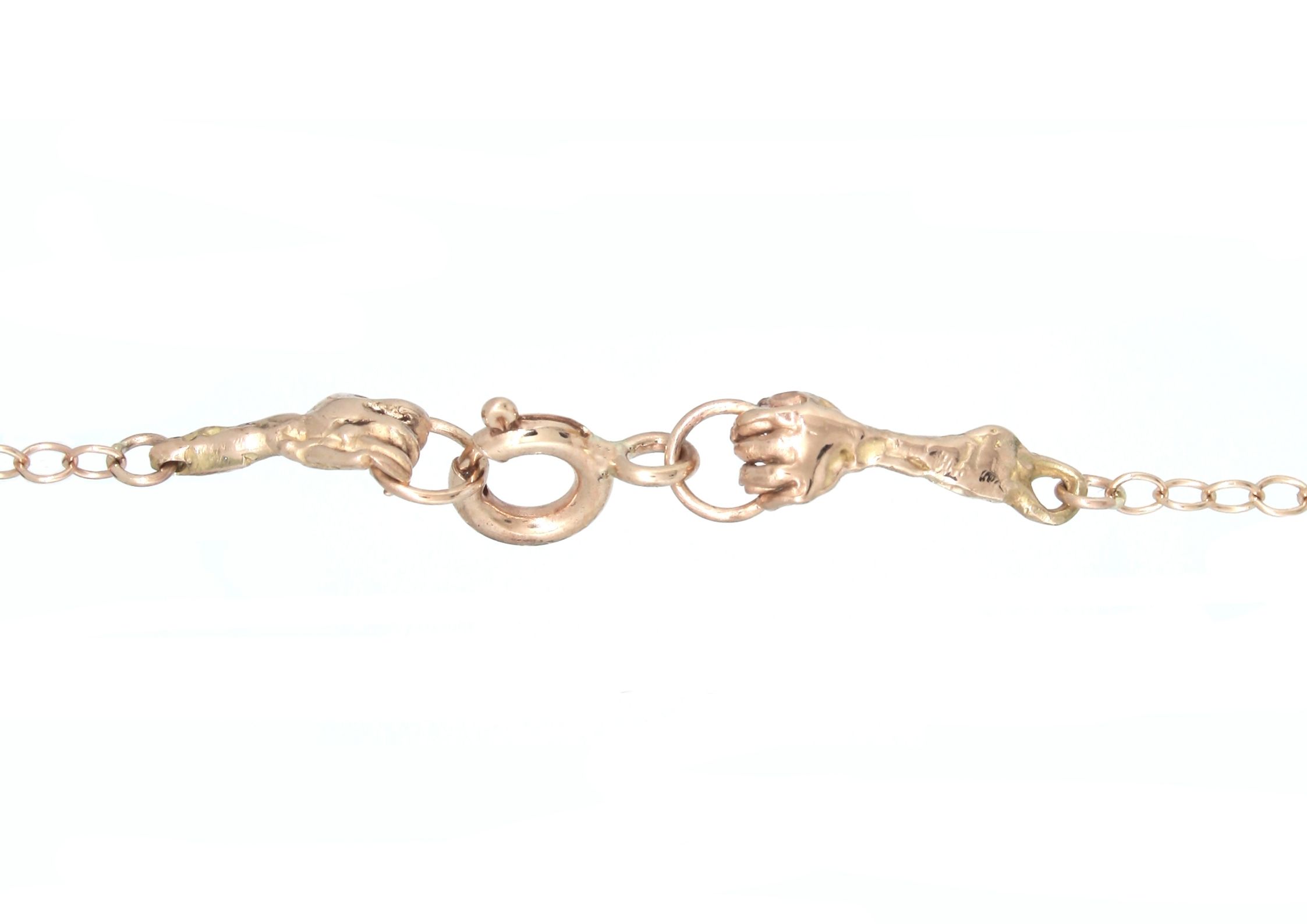 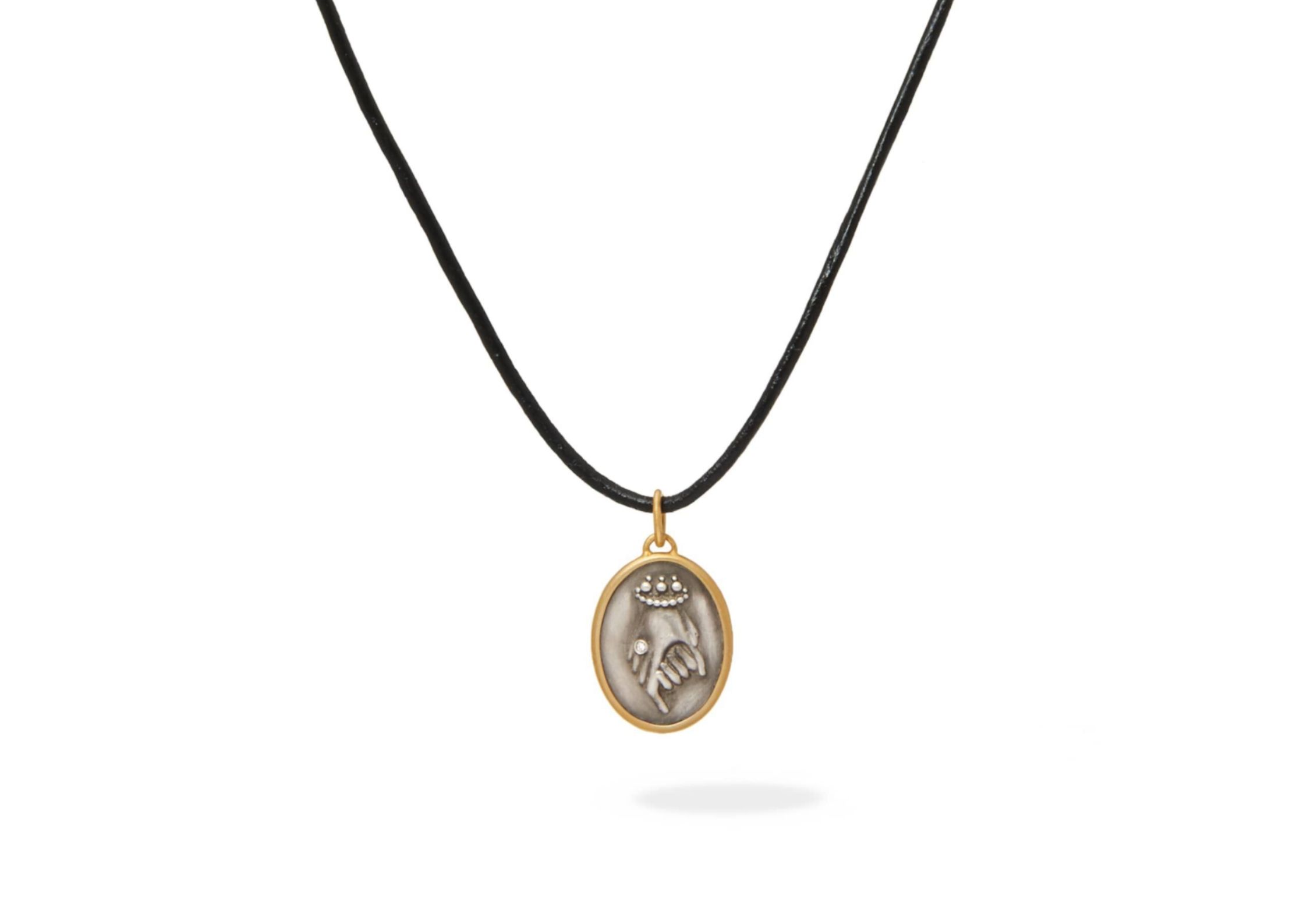 In the 21st Century, there is an underlying quest to become more than human; as medicine and science advances, there are missions to alter genes, cryogenically freeze ourselves for future breakthroughs, and even move planets to give humanity a new environment. Technology has ensured individuals can communicate more easily and often than ever, and a global pandemic has led to us being physically separated from one another. It is ironic that while we test our newly developed scientific abilities during this strange time, the thing humans long for the most is touch.

There has been a notable rise in the use of hand motifs, and other human limbs, in jewellery design during the past year. This symbol, once an ambassador of skin-on-skin human interaction, has been redefined as a reminder to keep our distance. In a time when we cannot freely embrace one another, hands appearing in jewellery are subsidising the need for touch and togetherness.

As early as Medieval times, remnants of touch give clues as to how religious and important objects were revered. In a society ruled by the Church, the hands of those in power were praised; it was widely believed the king’s hands could heal sickness, and touch would relieve those suffering. Kissing the hands of the Pope, a tradition still in practice today, is said to bring you closer to God. From the 12th Century, it was common for reliquaries to be in the form of limbs, bringing a physicality to the act of worship. An arm, for example, could be waved above a crowd as a means of ceremonially animating a saint. 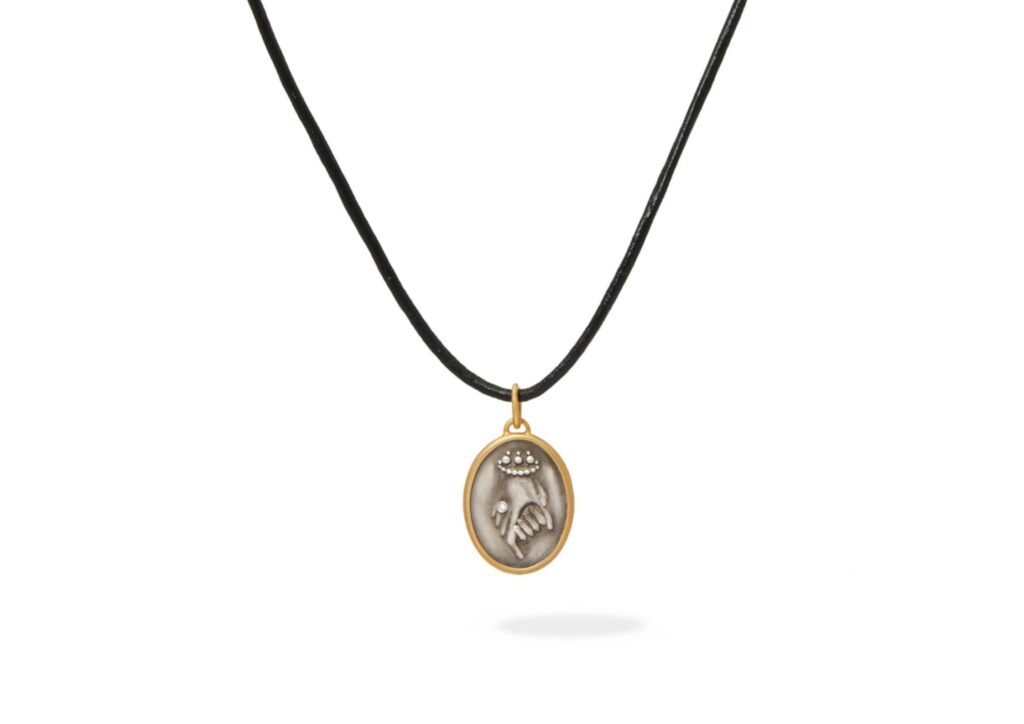 The impact of World War I on Surrealist severing

The distorted body appeared in Surrealist art and literature as a critique of the order of society. The Freudian fear of castration extended also to limbs within Surrealist expression; severing an arm or a foot destroys the illusion of human bodily perfection. Surrealist writers such as André Breton and Louis Aragon, having trained at the Parisian military hospital Val-de-Grâce as physicians, were at the forefront of World War I. They would have been exposed to terrorised bodies of soldiers, seeing first hand the violent consequences of war.

During World War I, the French Government opened a museum at Val-de-Grâce showcasing the wonders of reconstructive surgery, in a bid to keep up morale amongst soldiers and their families. Side by side, wax sculptures showed deformed faces and what those faces might look like after surgery. It is claimed that this exhibit was hugely influential on Breton and Aragon, and the wider surrealist movement.

In his 1926 book Le Paysan de Paris, Breton wrote: “Surreality will be in any case a function of our willingness to completely defamiliarise everything… right up to the point of defamiliarising a hand by isolating it from a man.”

Before World War I, supported by Freud’s psychoanalytical research, it was widely accepted that so-called irrational hysteria was linked to the female brain. As distressed soldiers returned home, the change in emotional state of these men was criticised as feminine or homosexual. The emasculation painted onto men suffering these emotions, along with visible mutilations of their bodies fed the fear of male castration. Surrealist thinkers attempted to redefine this hysteria, rejecting the rational attempt at forcing normality.

Artists such as Max Ernst tapped into the time’s erotic anxiety by distorting the female form while still presenting it as an object of sexual desire. Photography as an artistic medium was gaining popularity, and collage was an avenue to physically piece together disparate parts, and create an alternate reality. Art also began to show a different perspective to the propagandised bodies of soldiers, and the disparities of war. Prosthetic limbs were becoming more common and were fetishised as a different kind of wholeness to that we knew. An understanding was forming of a different kind of man returning from war.

These Surrealist ideals extended into jewellery design, with artists like Salvador Dalí creating wondrous pieces: jewel-encrusted red lips bared pearl teeth; eye-shaped brooches with clock irises cried diamond tears; ornate leafy necklaces led to a dangling face formation with star sapphires for eyes. In 1940, Dalí said: “I try to create fantastic things, magical things, things like in a dream. The world needs more fantasy. Our civilisation is too mechanical. We can make the fantastic real, and then it is more real than that which actually exists.” 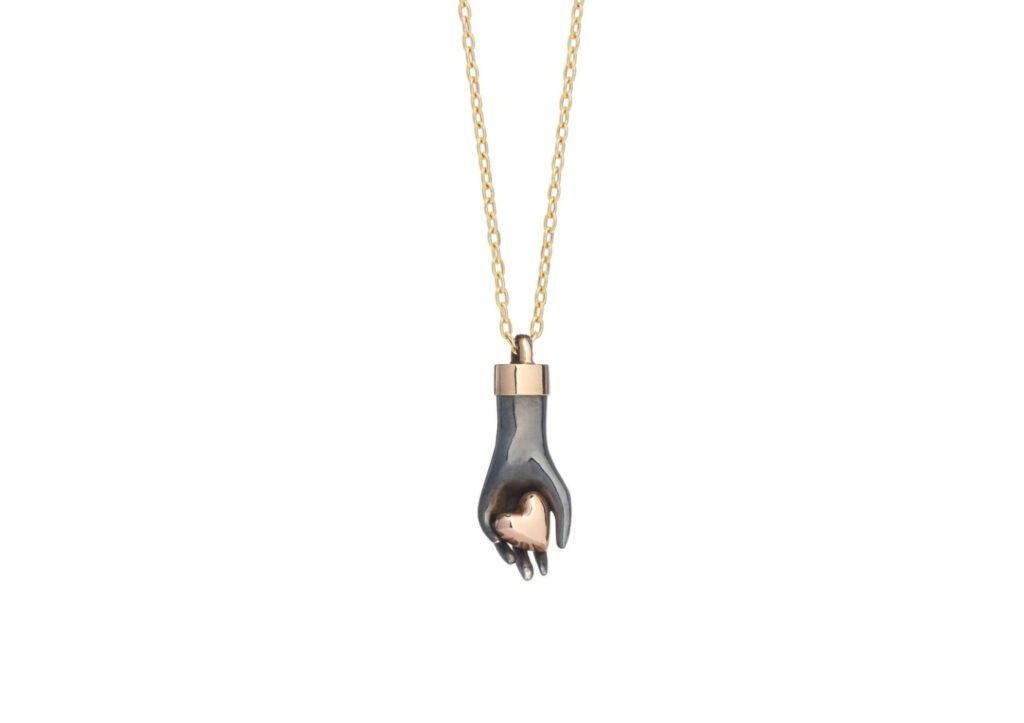 Another war, a different reaction

After World War II, the use of the body in art was discarded completely as modernism and abstraction came to the forefront of creative expression. For example, Dalí used only subtle references to body parts to discuss how we interact with each other in a post-war society. His gold telephone earrings with tear-drop-shaped rubies and emeralds only hinted to the human ear, instead representing the possible danger of the speed of modern communication.

Exploring anything but the human form was vital after the catastrophic eugenics attempted by the Nazi party. Not by coincidence, art movements in the coming years pushed against order with explosions of abstract colour, and the use of the human figure in art is not seen in full force again until after the horrors of the war had somewhat faded.

Now, as we find ourselves in a new kind of war, battling against a global pandemic, the image of the hand is frequently appearing in jewellery as a precious symbol of touch. Los Angeles-based jeweller Rachel Quinn’s My Love necklace features a hand holding a heart, symbolising love and gift giving. London-based Scottish jeweller Fraser Hamilton has a large collection of rings with tiny hands clutching colourful gemstones. 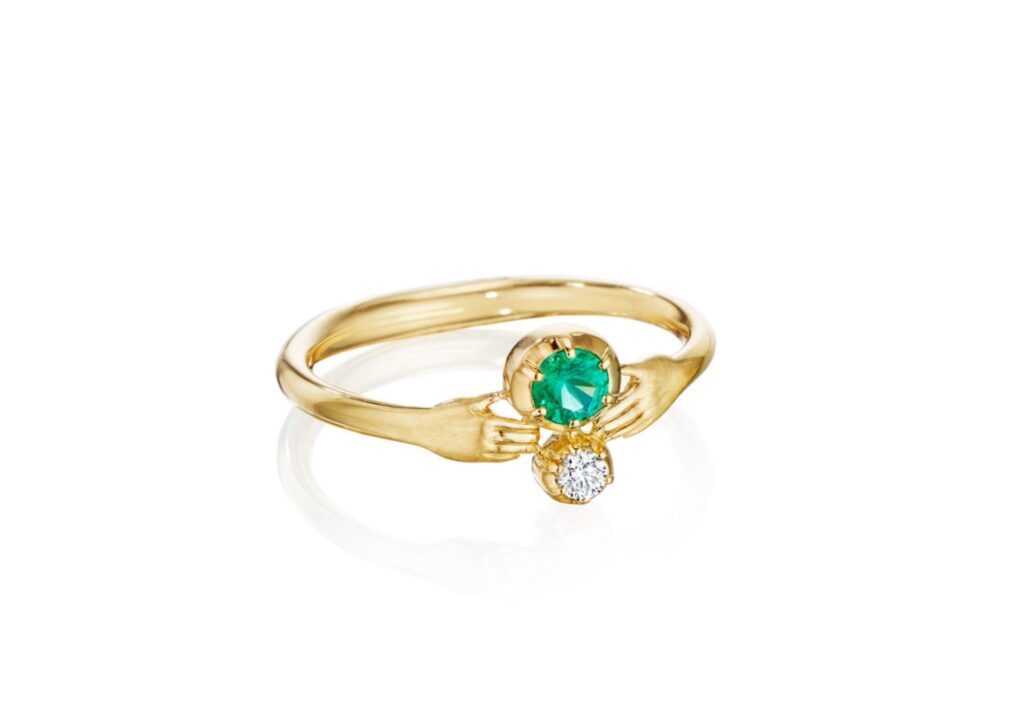 Anthony Lent is a New York jeweller playing with the idea of gold hands used to clasp and proffer gemstones, who takes the motif further by adorning those hands with their own rings.  For a true Surrealist revival, Schiaparelli’s latest jewellery collections celebrate body parts in all their detached wonder, including full-finger golden rings that ape the look of real fingers before spiralling off into impossibly long, curving fingernails.

In my own recent work as a jewellery designer, I have been drawn to using both hands and human figures, finding inspiration in bodily positions found in Medieval and Renaissance artwork. I have also been exploring positions that could be interpreted in contrasting ways, such as a woman who could be seen as either dancing or fighting at once, either powerful or submissive. I aim to open a discussion on how we interact with one another and history.

Casting the human form in precious metals, be it a whole figure or a limb, is an act of solidifying the ephemeral body. Adding gemstones creates another dimension to the piece, asking the viewer to question what is value, and how we relate to natural and synthetic objects. Using hands to grip the clasps in my Hand Bracelets, the wearer is forced to interact with the hands on the bracelet, which then hold the piece together throughout the day, giving a reminder that touch is beautiful and precious. 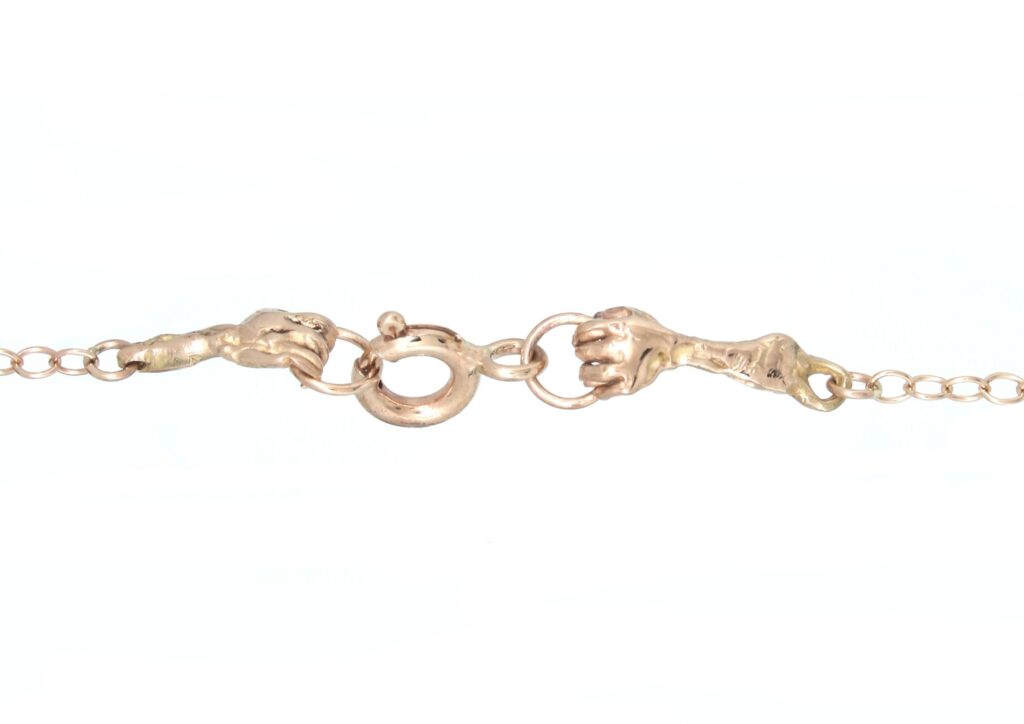 Not being close to one another over the past year has provided a unique outlook on societal norms, and created a pause in the capitalist progress of the 21st Century – something the Surrealists were willing to happen through their work. During this time, we have been reminded of our primal needs; something that is perhaps necessary to connect us back to what it means to be human. Disorienting a hand from the body in art or in jewellery plays on redefining the most familiar of objects as a way of confronting personal, social and cultural anxieties. The act of using the body in art and jewellery now, is a way to explore a redefining of humanity in a global pandemic.

Ruby Taglight is a jewellery designer based in London who hand makes one-of-a-kind precious jewels, each signed with a laboratory-grown ruby. See more of her work at The Jewellery Cut Shop.